Book 2 Book is an idea that I had based on some conversations with fellow educators. Most English teachers that I've talked to do not participate in the YA blogging world and some are not readers of YA to the (crazy) extent that I am. Because they are not as interested or well-versed in this world as some of the bloggers I've met in my travels around the blogosphere, they might not know about the abundance of great YA available. And, so much YA can be used in the classroom because it connects to the classics that we teach.

This post is going to be slightly different from others that I've written for this feature. I usually try to compare a YA book to a classic that is taught in lots of schools. For this one, I am going to break tradition and compare/ contrast two YA books (one newer, one older) to an adult book that is taught at my school in an elective course. This adult book is probably not taught in too many schools, as it is very gritty and potentially controversial. In some respects my school is fairly open to allowing students to explore reading materials that other schools would shy away from.

The three books that I am going to talk about are: The Mockingbirds by Daisy Whitney, Speak by Laurie Halse Anderson and Lucky by Alice Sebold. I'll start with The Mockingbirds, which comes out in early November.

The Mockingbirds are a sort of vigilante group of students who take the "law" into their own hands. They are an integral part of student life a a small prep school called Themis Academy. Students who feel that they have been wronged by other classmates come to the Mockingbirds to find a solution. According to the characters in this book, the adults on campus are more interested in thinking that the student body are perfect. When problems are brought to their attention, they are swept away and not really addressed.

The book starts with the main character, Alex, waking up in an unfamiliar room. Her mouth is pasty and dry and she is naked. Next to her is a boy that she does not recognize. She hastily throws on her clothes and leaves the room, but not before she sees two used condoms on the boy's floor. Before she can leave, he wakes up a little and asks if she'd like to "go" again.

The night before, Alex had been a very drunk virgin. She doesn't automatically feel that she has been raped, but as she talks with friends and as memories about that night come back to her, she knows that she was a victim of date rape. And she wants to fight back. Enter the Mockingbirds.

Laurie Halse Anderson's Speak is one of the first (modern) YA books that I read before becoming a teacher. I chose it as part of a course I took on YA literature. It had just come out and was not the huge success that it is now. I loved it. I knew that I needed to put it in the hands of students. And, several years later, I am lucky enough to work at a school where it's required reading for all freshmen. I get to teach it every year. And it's a powerful experience.

In Speak, the main character, Melinda, is raped at a party during the summer before her freshman year. After her rape, she calls the police to report what has happened. She finds that she can't speak and the police just come and break up the party. Melinda becomes a social outcast because every thinks that she purposefully broke up the party. No one knows that she was raped by one of the school's star football players.

Alice Sebold's Lucky is a nonfiction memoir of the horrific rape committed against Sebold when she was an undergrad in college. She was raped and beaten to the point of severe physical (not to mention psychological) harm. She did not know her attacker, but decided to press charges and follow through with a lengthy court trial. Like the girls in the fictional books, Sebold had been a virgin before she was attacked.

This book is taught (I think as an optional read) as part of a women's lit course. It is a deeply disturbing, yet unforgettable book. And it's true. Sebold, author of The Lovely Bones, really was raped. She really did survive. She really did fight back, despite disbelieving police. 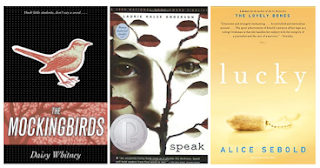 A central character being raped is not the only feature that these three books have in common. They all explore the feelings, thoughts, and experiences of a rape victim in a realistic manner. All of the girls seek help and want to confront their rapist. All three are extremely graphic, but feel real. And, all three girls deal with their rape differently.

Speak is probably the most teachable of these three books. It's very realistic, not as graphic, and there are side issues like bullying and alienation that can be talked about. Lucky and The Mockingbirds are much more graphic and are probably not books that I would teach to a whole group of students as required reading. I do have Lucky available to students if they'd like to read it and have had some check it out.

My only concern about The Mockingbirds is the lack of police or adult contact in helping to prosecute the rape. I am not one who feels that all YA should have a responsible and reliable adult ready to solve problems and make the world right again, but I think that there's a danger in promoting the idea that rape victims should have their friends put their rapist on "trial". The main character does eventually talk to an adult, and that made me breathe easier.

Otherwise, The Mockingbirds is a great read. It would be amazing to teach these books together, either as part of a lit circle or a course on issues that teens (and adults) face every day. Whether we like it or not, girls are raped. Not talking about that fact does not change anything. In fact, it is made worse through silence. I am happy to have read The Mockingbirds right before I start up my unit on Speak.


**Thanks to Angela of Dark Faerie Tales for providing an ARC of The Mockingbirds
as part of her ARC Tours**
Posted by Mrs. DeRaps 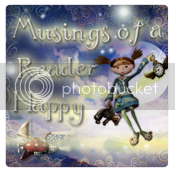