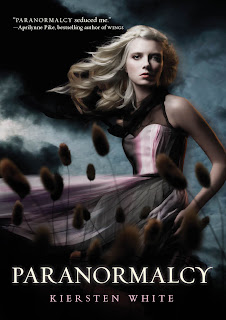 Evie isn't your average every day girl. She's not even an average paranormal girl. Everything about her--from her birth to her teen years--is mysterious and interesting. Only, Evie doesn't quite see her life this way. She think it's pretty boring, not going to high school and having a locker like all other "normal" teens. Her life is anything but normal. And that's never really been enough for her.

She works and lives at the International Paranormal Containment Agency (IPCA for short). She came to the IPCA when she was just eight years old, after she was discovered. You see, Evie can see through the glamours that most paranormals (vampires, werewolves, zombies, mermaids, faeries, etc) use when trying convince humans that they are regular people. So they can kill them. Evie sees what no one else can--the truth behind the lie.

But Evie's truth is that she'd rather have the every day problems of the teens she sees on TV than the ones she has. She has a sort of ex-boyfriend faerie man who is stalking her a little bit, a best friend who's a mermaid in a glass case, and no family that she's ever met. As far as she knows, she's entirely alone in the world. That is, until she catches a mysterious paranormal sneaking around the IPCA center after hours. Of course, she tazers him, but after that she realizes that he's cute and that they have a lot in common. By the time that she's figuring out who he is, she and all of the other humans and paranormals at the IPCA are in trouble. Because there's a serial killer going after paranormals. And it's just arrived at the IPCA.

I'm not even doing the plot justice by summarizing it here, so I'll just switch to gushing about how awesome it is. I really, really wish that I had read this book when it first came out, but I never really saw how great it was. I read the summaries and reviews and wanted to read it, but never got around to buying it.  Until Ms. Kai from Fiction State of Mind sent me this awesome book. I've been wanting to read it for some time and am so glad I did. Thanks, Kai!

What did I love about it? Well, it's funny and light and interesting and there is some suspense, but most of all, it's original. I felt like I was reading something totally new and fresh, which is awesome because I've read an awful lot of paranormal in the past year and I think it takes a great plot and cast of characters to seem "new" and "fresh" in this saturated genre.

I loved that it was funny, too. So often paranormal lacks a bit of the humor because it can take itself a little too seriously. Sure, the world and all of humanity is going to perish in a paranormal-induced whirlwind of fire and craziness, but there is room for a few laughs here and there, no? Best of all, the humor wasn't forced, but felt natural coming from Evie and a couple of the other characters. Not everyone was funny. Evie was because it is part of her personality. Love her!

And the relationships were interesting. I love thinking of this girl who has these powers and can use them to better the world, but who still sees her life as boring. Is any teenager every satisfied with their life? Doesn't every teenager claim to be bored most of the time? Even if they are chasing vampires and werewolves, I think that it's just the nature of the teen years to feel like they're missing out.

I cannot wait to read more of this series. I've read that it's going to be a three-part series, which is delightful. I haven't heard any info about the title/ cover for book two, but I will be on the lookout!
Posted by Mrs. DeRaps