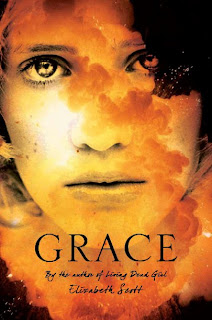 In a futuristic or fictional present, Grace is an Angel of Death. She, along with many other girls of the "People," has trained to become a suicide bomber for years. Unlike many of her Angel sisters, she is not completely successful in her mission. She returns to her encampment in shame, and then flees. To an unknown future.

Her companion in flight, Kerr, is attempting to escape demons of his own. He has ties on the other side of this insane war, the side that Grace has been trained to kill.

Now, this unlikely pair is traveling across their desert landscape, attempting to avoid discovery by the many of Keran Berj, a totalitarian dictator without a conscience or a care for his citizens. He wants absolute power, and people like Grace and Kerr are standing in his way. Which cannot go unpunished.


*   *   *
That was one of the more difficult plot summaries I've written. Not because I didn't understand or appreciate the book, because that could not be farther from the truth. I loved it. I was moved by the spareness of the language in this book, by the beautiful brevity of this story.
And the language is not all that I loved. I could not stop thinking about this book after I finished reading it. It only took a couple of hours to read (devour) but since I turned the last page, I have had several hours of contemplation about the author's intent and the message that these two teens are sending with their story.
With this book, I see how corrupt all causes--even those who seem tied to protecting people and earth and freedom--can be. That when the mission becomes death and destruction of an "enemy," no matter how common or evil, that those who are fighting will never be the same. That followers and fighters will live and die for a cause, never having lived for themselves. That no matter how successful you are in aiming at your target, it will always move and new enemies will pop up as soon as one falls. It is the nature of evil, to reappear.

In the positive, I can see that there are ways to live in peace. But, this starts with an appreciation for life. Not just your own, but the lives that you don't know exist. I don't know that Grace exists, but I'm sure that there are girls like her, waiting to be sacrificed for a war that will forget them soon after they perish. That there are people everywhere and all of them desire to have access to life without fear. But, I am going to understand that fear causes some people to want to hurt others. I don't know that we can stop this cycle of fear and control and a lack of appreciation for the lives of others, but I do know that the first step in any change is thought and conversation.

Books like Grace are a way to start that conversation.

Thanks to Elizabeth Scott for allowing me this train of thought. I'm going to stay on for a while.