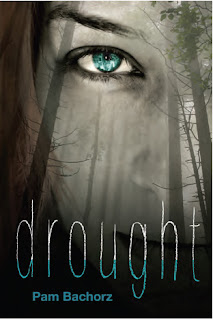 When I first heard that Pam Bachorz had written another dystopian book, I was overjoyed. I absolutely loved Candor and couldn't wait for another book by the same author. At first, I enjoyed this new book and when a bit starry eyed by the possibilities the world of this book held. Unfortunately, though, this love was short lived and was quickly replaced by lots and lots of confusion.

Drought is the story of a sort of cult, the "Congregation," who has lived for hundreds of years in a secluded section of forest.  They first entered the forest as a group of free people, but were imprisoned in it by an evil dictator named Darwin West more than two hundred years ago.

Though the outside world has progressed without them, it's as if Ruby and her brethren are still in the early 1800s. They know nothing of the outside world and are completely focused on the one thing that will keep them alive and spare them from the wrath of Darwin and the overseers--Water. With drought at an all-time high, Darwin is obsessed with the Congregation collecting as much water--single droplet by singe droplet--as they can. Each day, each member of the Congregation stuggles to find a cup fo water. Seems easy enough, but the end of each day finds more and more of the Congregation beaten bloody for their failure to produce.

Why Water? This is not your every day H2O. Darwin thinks the water in this forest, the Water that has sustainned life among the Congregation for so long is magical because of the manner in which it's collected. Little does he know that every night, Ruby's mother Sula sneaks off to the cisterns that contain the magical water to add in the magic ingredient--the blood of the group's prophet.

But, the blood is almost gone and the prophet, Otto, has yet to return after hundreds of years. How will the group survive without the blood of their savior and without magic water to keep the evil Darwin at bay?

Even as I write this summary, the book almost sounds fairly good. In its plot, this book has definite potential. Solid potential, even. In actuality, the promise of the plot is not quite realized. There is a definite underlying story here, an epic one. It might be related to Jesus and those who blindly follow prophets and the blood of Christ and profiteers of religion...But, I'm not exactly sure. Because there is the whole supernatural living-for-hundreds-of years thing thrown in and lots and lots of unanswered questions.

It feels to me (and I'm not saying this as an author, but as a frequent reader of this genre), that there was too big a bite attempted with this book. As in, if there were less issues taken on, there might have been a great book here. I did not hate this book, but I feel like it was never really came together. I am hoping that some of the elements of this story that were not so clean were cleaned up for the final draft. The ARC that I read is rife with errors, more so than many other ARCs I have read. Maybe the published version is cleaner and some of the plot disparities and questions have been cleared up?

I know that I would still read this book even if I had read negative reviews of it beforehand. I love this genre so much that I really and truly can overlook much of the negatives about any book written in this genre. If you're a die hard lover of dystopias, you will probably read this book no matter what people say. It's not perfect, but there's still some great ideas and some interesting moments in this story. If you're  more casual in your approach to dystopias, you may not want to pick this one.

Based on Candor, I will continue to read book written by Pam Bachorz!