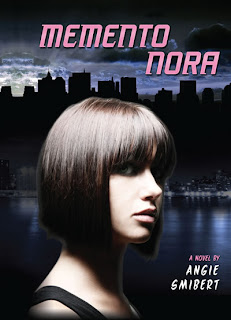 In a futuristic world, Nora and her family live as sheltered as possible from the terrorists that threaten their safety. Lucky for Nora and her mother,  Nora's father is a wealthy business man with great connections and lots of resources. So, when Nora and her mother witness a horrific terrorist bombing while shopping one afternoon, they are instantly given appointments at the Therapeutic Forgetting Center, or the TFC.

Once there, Nora watches her mother take a little white pill--One that will erase any memory of the terrorist attack. For Nora, this is her first time at the TFC. She doesn't want to he haunted by the memories of the violent explosion, but she also does not want to completely forget them and be "glossy." While in the waiting room of the clinic, she sees a rebellious classmate leaving the doctor's office. He spits out the little white pill right in front of Nora, making a point for her to see him doing so. Nora follows suit, and an unlikely but revolutionary friendship is formed.

This entire novel is narrated by three lead characters: Nora, Micah (the rebel teen), and Micah's friend Winter. These three teens start a small uprising, which has a huge impact on their world. Each of the teens has their own motivation for creating an expose of the real group behind the terrorist attacks and the Therapeutic Forgetting Center. United by this common interest, they work to create a "memento" or a reminder of the events that everyone is supposed to forget in comic book form.

Don't be fooled by this tiny little book. It contains less than 200 pages, and it's small in stature, but it packs a huge punch. I feel like I could have read more about the world that's created in this story, but I was satisfied and left thinking big huge wonderful thoughts once I had finished. I love a book that doesn't answer all questions for me, but allows me to think for myself. Which is probably the point of a story like Nora's. We need to be allowed to interpret and deal with our own memories in a way that works for us.

I can see lots of connections to other books in the dystopian genre, but I still feel like this is a fresh take on the future. Certainly, there are definite links between the world of this book and the one we currently live in: Out of control advertising, gated communities, conspicuous consumerism, the culture of pills, and the use of underground tactics to expose governments. Good, old fashioned protests. Almost like the ones in Egypt. But different.

For all of these reasons and more, I'll definitely purchase a copy of this book for my free reading shelves in my classroom. I know that this story will appeal to some of my up-and-coming revolutionaries and the size will lure more than a few reluctant readers. And, once they're in, they'll want to find out what happens.