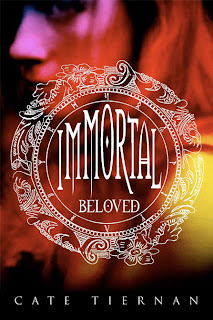 For some reason, possibly because I watched a movie with the same title, I thought that this book was going to involve Beethoven. Perhaps that is why I took so long to read it. I am a fan, but not so much that I was moved to read a book about him. Alas, I was wrong. This book had nothing to do with Beethoven and everything to do with utter awesomeness.

The immortals in this book are not vampires, not some crazy creatures. They are born like anyone, and are just exceptionally hard to kill. This does not mean that they make great decisions and choices after having lied hundreds of years. Lots are old, yes, but few seem truly wise.

Nastasya is one such immortal. In this first book of the planned triology, she's 449 years old.  Old enough to have lost loved ones, to have lived through plagues and dictators, to have pushed back tragic memories from her early years. You see, only two immortals can have an immortal child. So, Nastasya's parents and siblings should still be with her. But they're not. Because they were killed when she was just a little girl. And, try as she might with alcohol and meaningless excess, Nastasya cannot escape the pain and fear of that dark night. The night she lost everyone she truly cared about.

Now, Nastasya has left behind her reckless (and potentially evil) best friend and has checked into a sort of rehab for immortals. Here, she'll be expected to practice being "in the now" by doing lots of farming-related chores. Not this city girl's idea of a fun time. But, she'll also have a chance to learn more about her powers--the magick that affects her more than anyone else. She thinks she's just no good at it, but might surprise herself once she hones her skills.

As Nastasya opens herself to understanding more about her power and her potential, she starts to remember the details of the worst nights of her life. And, just because Nastasya doesn't understand her powers and her value does not mean that others don't. They might come looking for her.


*   *   *
I could not put this book down. It's one of those reads that I wanted to last forever. I kinda felt cheated that it was only a little more than 400 pages--Why couldn't it have gone on and on? I've never read any of Cate Tiernan's work, but am now a huge fan. She has this ease of narration and dialogue that sounds like actual people talking and thinking. Her characters are great, and this plot is absolutely engaging and riveting.
Moreover, I could completely picture everything that was happening in this book. Even the scenes where magick was used were crystal clear to me. This is not always the case for me. I cannot wait to continue this story and find out what happens--There are so very many possibilities! Alas, the next book does not come out until September of 2011. At least the New Year has started and I'm that much closer...Not really comforting, but it'll have to do.
Posted by Mrs. DeRaps