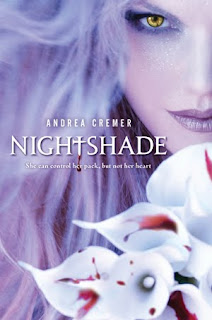 Now I see what everyone has been raving about for months! This book was absolutely un-put-down-able. I was hooked almost as soon as I started it and could not help but sneak away from New Year's parties to read pages here and there. My friends must think there's something terribly wrong with me...Oh well. I had to finish this book!

For the (very few) of you who haven't read this book, Nightshade is a fairly complex, but irresistible story about love and lust and loyalty. It starts with the near-death of a human teen named Shay. He's been hiking in an off-limits section of the mountains of Vail, Colorado. In these upper peaks, the world is different. It's divided into rigid groups: The Guardians, shape-shifting wolf/humans, the Keepers who are witch-like masters of the wolves, and there are some humans. Add to this mix the dangerous Searchers, who the Guardians kill in order to protect the Keepers and the secrets of this little mountaintop world.

The main character, Calla, is the alpha of her pack. She is destined to be united with Ren, a handsome and powerful alpha from a rival pack. The Keepers have decided to join the packs, the Banes and the Nightshades, in order to form a new, younger pack. Calla and Ren will lead this new pack and protect the Keepers from any harm. That is, if all goes well.

Which it doesn't. When Calla saves Shay, the human boy, from death-by-grizzly attack, she sets into motion a huge turn in events. Shay is drawn to Calla and Calla cannot help but feel stirred by Shay. She knows that she's promised to Ren, and feels for him too, but she cannot ignore the innate response she has to Shay's presence. And, when she's assigned to protect Shay by her Keeper, she only grows more and more attached to him.

But, not all is well in this seemingly luxurious and idyllic world. The Keepers are hiding some very important information from the Guardians. And Shay and Calla have discovered some ancient and recent historical facts that could change the relationship between the Keepers and the Guardians forever.

I loved that this book was more than just a love triangle, with an inevitable ending. I also loved that, like Calla, I was torn between Shay and Ren. There was no clear victor or best choice for me, and I think that Calla had the same problem in choosing. The fact that Ren was not made out to be some power-hungry monster, but a viable option for Calla's love and affection made her choice so much more real. She wasn't just choosing between two handsome boys, though, she had the weight of tradition and history on her shoulders, which also made her struggle so much more real.

This another series book that I cannot wait to read more of in 2011. Luckily, Wolfsbane, the next book in this series, comes out in July of 2011. Not so far away, kind of. Just all the more reason to be happy that 2011 has finally arrived!
Posted by Mrs. DeRaps