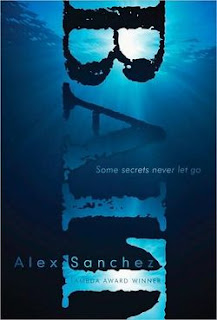 I bought Alex Sanchez's Bait without knowing much about it. I was having a guilty moment in Barnes and Noble--One where I look at the pile of books that I'm about to purchase and realize that there's not a single one that's going to appeal to the teen boys in my classroom. So, I went back to the stacks and pulled this one out without even reading the back of the book. It looked masculine; that was all I needed at the time.

And, it's been sitting on my TBR shelf for sometime. I pulled it down to read this week after one of my make students asked when I was going to stock more "boyish" books. I felt guilty. So I read this one.

I am shocked at how amazing this book is. Shocked. It's so gritty, so real, so well-crafted. I cannot believe that I let it sit on my bookshelf at home for months. It's too good to not be read. It needs to be read. By boys and girls and people who work with teen boys. It's a must-read.

Actually, while reading this book I could not help but think of the recent Tyler Perry interview series with Oprah. In these interviews, Mr. Perry talked about the horrible physical and sexual abuse that he experienced as a young boy. This book is about this very subject. And, from Mr. Perry's descriptions to the way that the main character describes his guilt, anger and conflicting emotions in this book, this story rings true.

In this story, Diego is a sixteen year-old boy with anger to spare. He is constantly getting in fights and cannot control his anger, especially if someone dares to call him a gay or a "fag." He is so touchy that even his best friends are afraid of his unpredictable rages. When a fight lands him jail, Diego knows that he has to change. He meets a man named Mr. Vidas, a parole officer, and wants to spend more time with him. There's something calming about Mr. Vidas and Diego knows he needs to feel calm if he's ever going to work through his anger.

The relationship between Diego and Mr. Vidas takes a while to develop, but Diego quickly finds that he can tell Mr. Vidas anything--even the truth about what happened with his former stepfather and why Deigo feels the need to cut himself. As he shares more and more about his traumatic childhood and his suicidal thoughts, Diego starts to release his anger and feels like he's more in control of his emotions. Diego's recovery and healing are not completely finished by the time the book is over, but I had the impression that he was a changed person.

It's always difficult to talk with students about rape and sexual assault. I teach Laurie Halse Anderson's Speak and have guest speakers from our local non-profit organization come in and talk about the realities of these issues. But, there's a part of me that has always wished for a book that was aimed toward teen boys on this subject. It's almost like a taboo to talk about that fact that boys are sexually abused and assaulted. It's much more acceptable to talk about it happening to women and girls. I don't exactly know why this is, but I want to provide materials on this subject to the students in my classroom. Just in case. You never know when or how a book is going to change someone's life for the better.
Posted by Mrs. DeRaps