For the third Mini Challenge of Princess Bookie's Contest Craze, participants are asked to choose a stand-alone title that they'd like to see have a sequel. To complete the challenge, bloggers can create a cover, title, and plot for this imaginary sequel.

One book that has been in my mind ever since I read it this past March is Amy Efaw's After. It's about a girl named Devon who hides the fact that she's pregnant from everyone around her, including herself. When the baby is born, Devon has a bit of a psychological breakdown and ends up abandoning her newborn in a dumpster.  Due to her actions, Devon is placed in a juvenile detention center and is tried in court. As the book progresses, Devon remembers more and more of what happened on that fateful morning and begins to take personal responsibility for her actions.

As many bloggers have noted, this book leaves off without every problem solved. I personally thought that this was a great decision on the part of the author, because real life is not always resolved and wrapped up within the course of three or four hundred pages. But, that doesn't mean that I don't want to know what happens to Devon and her baby girl, who was taken to the hospital and survived her traumatic birth. 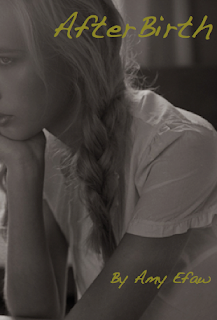 In this sequel, we would be reunited with Devon and her daughter fifteen years after this incident. The baby girl would now be a teenager and is being raised in an adoptive home. While completing a research project for a history class, she stumbles across the story of a baby abandoned in a dumpster on her birthday. Her exact birthday. Her interest is piqued and she starts to unravel the secrets of her path--a path that leads to Devon, now in her early thirties.

I'm calling this sequel After Birth. (I hope it doesn't gross anyone out!) But, Amy Efaw should probably write this story. It's going to be pretty amazing and will provide lots of answers for those curious bloggers who are asking for more.
Posted by Mrs. DeRaps