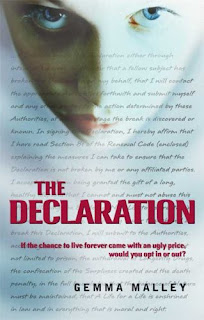 If you could live forever, would you? And, if most people said yes, how would the world deal with the competition for valuable natural resources and energy?

This is the premise for Gemma Malley's The Declaration. Under the Declaration, people who chose to opt-into the Declaration do not have the right to reproduce. If they do, their children are called Surplus. These surplus children are taken from their parents in raised in institutions, where they are beaten, near-starved, and convinced that they are virtually worthless. Their only hope is to learn to be Useful and to serve the Legals.

This is the basic life story for the main character, Surplus Anna. She was discovered when she was just two years old, and has been told that her parents were greedy law-breakers. Raised in the Grange under the watchful, cruel eye of Mrs. Pincent, she has learned to be meek and to not question her life's lot. She believes this to be true and her only concern is to find a way to become Useful and to find a good placement where she can wait out her life in complete servitude.

That is, until an older boy named Peter shows up at the Grange. He is much older than the average new Surplus, and is filled with revolutionary ideas and is wild by Surplus standards. Peter challenges everything that Anna has believed for her entire life. When he starts calling her "Anna Covey" and talks about her parents and says that he knows who she really is, he puts her world into a tailspin.

Though she resists Peter's information and knowledge, she cannot help but be intrigued. Is there more to life than being a servant? Does life have value, even if one is born a Surplus?

I thoroughly enjoyed this book. I've actually had it for a long time, but had never read it. I found it on my free reading shelves in my classroom, and vowed to read it for a Dystopian challenge. Normally, I read all of the books on the shelves that I make available for my students, but this tricky title slipped in without my knowledge.

I am so glad that I read this book. I really and truly stopped to think about what our world would be like if there was an option to take Longevity drugs. What I imagined is not pretty. I think that many countries would use this as a way to reward the rich and eliminate the poor. I'd worry about several of the minority populations on our planet.  How would they survive and persist if there were expensive drugs that only a small population of people had access to? I could go on and on. This is a great book for conversation and would be perfect as a whole-class read or as a book club selection.

**Read as part of the Y2-D2 Dystopian Books Challenge at Bart's Bookshelf**
Posted by Mrs. DeRaps