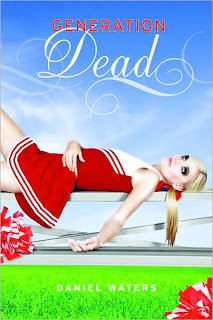 I've read a few zombie novels now, and am loving them. Some are post-apocalyptic and scary (Forest of Hands and Teeth), some are classic-funny (Pride and Prejudice and Zombies), and others are a bit of a social commentary. Generation Dead is more of the latter. It's not the most plausible, but it is interesting.

The plot almost reminds of an integration story. Zombie teens (created after death from a combination of a mysterious brain fungus and teen hormones) are now a part of society in the United States. So, they are starting to want to do normal things, like have jobs and go to school. Some parents are accepting of their "differently biotic" children; others are not. There is discrimination and bias and there are stereotypes and violence.

As typically biotic children and the undead start to mingle, relationships start to form. This is true of the main character, Phoebe, and her love interest, Tommy. He catches Phoebe's eye when he tries out for the football team. Of course, there are protests and anger and outrage at a zombie trying out for football. The living do not want their children mingling (or showering) with the undead.

But Tommy's just trying to prove a point. The he can do what the living can do. That the undead have rights that did not end when their hearts stopped beating. This whole civil rights aspect of this novel definitely made me think of other struggles for equality and acceptance. Certainly, I was reminded of the Civil Rights Movement, but also of more current issues like the fight for equal rights for gays and immigrants.

I loved this parallel. I did not get upset that there was little of the typical zombie stuff in this book. There were no zombie teens craving brains. No humans fleeing from the undead. If anything, the zombies were more at-risk from the breathers in this book. It's definitely a different take on a fairly typical paranormal subject, and it's one that I enjoyed.

And, if you're still interested in reading this book, I am giving away a copy of it along with an awesome bookmark and a "zombies eat flesh" button. Click here to enter!
Posted by Mrs. DeRaps