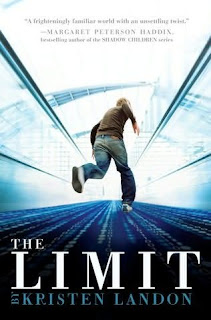 Americans tend to spend more than they earn. We have all read the headlines, watched shows like "The Real Housewives" and MTV's "Sweet Sixteen". We know that America has a problem with buying for pleasure, and some of us have even felt the repercussions of this spending philosophy (whether because of our own doing or because of someone else).

As bad as losing our jobs and our financial security has been, what about losing our children? Kristen Landon's The Limit imagines a futuristic America where parents who overspend lose their children to Dickens-like workhouses. Think Oliver Twist.

Except, not all of the workhouses are created equally. If your child is smart, he or she may live in the lap of luxury, unwittingly racking up more debt for your family. If your child is not so bright, they live a life of menial servitude until they turn 18 and are given their own limit. And the cycle continues.

This story centers around a preteen named Matt and his misadventures in one such workhouse. He is taken away from his distraught parents after they go on wild spending sprees. The saccharine-sweet woman who takes him to the skyscraper workhouse assures Matt that he will leave as soon as his parents pay down their debt and are under their limit. And, he can help by working hard on his computer. Too bad for her. Matt is no dummy and is not fooled with the fun and games for very long. He starts asking questions, demanding freedom, and causes problem after problem for the adults in the workhouse.

But, in a society that sees the spendthrift purchases of its adults as the inheritance of its youth, are Matt and his peers doomed to workhouses no matter how much they protest?

This is a thought-provoking and adventure-filled middle grade/ lower high school read. I think that there are lots of discussions that can come out of a reading of this book. Perhaps we need to start talking more openly with our young teens about money in order to prevent the very society that Landon predicts? I don't think it would hurt!

**Read and reviewed as part of the Y2-D2 Dystopian Books Challenge at Bart's Bookshelf**
Posted by Mrs. DeRaps