Book Review: The Eternal Ones 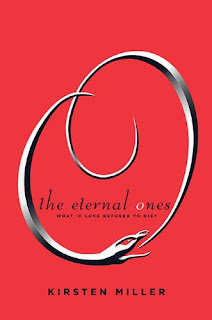 This is one heck of a crazy roller coaster adventure of a paranormal thriller romance. Every time that I thought I'd figured out what had happened and what was going to happen, some other bit of information or idea would totally disturb what I'd thought.

And I loved every second of it.

Th basic plot is this:  Haven Moore grew up knowing that she was meant to be win a man named Ethan. When she was a little girl, she'd tell her father all about Ethan. About their life in Rome and in New York City. She knew a whole lot about New York City, which was many miles away from her home in Tennessee.

Her father took her seriously. He contacted an agency in New York City, The Ouroboros Society, that dealt with people who had memories of past lives. Shortly thereafter, Haven's father was killed in a car accident that devastated her family forever.

Raised by a controlling and uber-religious grandmother, Haven was not prepared for the sultry memories of the romance she had with Ethan. And, she was also perplexed by the knowledge that she and her former-life lover died in a fire. Her whole previous life is very confusing and disconcerting to her. So, after a series of tragic events, she decides to head to New York City in search of Ethan and the Ourboros Society. Haven wants answers, but what she finds is going to shock her.

I read this book for the Readers Imbibing Peril Challenge (hosted by Stainless Steel Droppings). I definitely felt my heart race and my mind was whirling a million beats per second trying to figure out what was going to happen and what did happen to Haven in this life and in her past one(s). I was totally on edge and am thinking/ hoping/ probably dreaming that this is going to be a series and I'll get to spend more time with these characters. We'll see.