Book Review: The Best and Hardest Thing by Pat Brisson 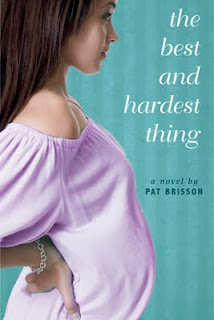 Molly is a good girl. She spends more time studying than gossiping with friends. In fact, she only has one real friend, and that girl is moving away. So, when Molly meets Grady, a new boy at school, she falls for him. Hard.

Only Grady is not a good boy. He's a couple of years older than Molly and has some shady dealings with other guys at school. And, there's some competition for his attention from other girls at school. With each and every obstacle that gets placed in her way to Grady, Molly becomes more and more obsessed with winning him over.

But, she is in danger of losing who she is. She's a virgin. She's a smart girl. She respects herself. She has earned the respect of others. Is she willing to sacrifice all of this for Grady? And, what happens once she's given herself to Grady? Will he stand by her? Will he take responsibility for the decision to not wear a condom?

Normally, I wouldn't give this much of a plot away in a book summary, but the cover of this book kind of lets you know where this novel in verse is headed. At first, I thought that Molly was immature and a little obnoxious in her attempts at changing her good-girl image, but I started to have more sympathy for her as she faced more and more problems because of her poor choices.

The poetry in this story is not quite flawless, but I enjoyed several of the poems to the point where I'd like to share them with students in my classroom. I felt that the poetry matured and grew as the novel progressed, which might have been the author's intent. And, there were several poetic forms included in this novel, which pleased this English teacher geek immensely.

I do love a good novel in verse and think that this one will appeal to quite a few of my female teen students. There are other novels in verse that deal with this subject matter, but this is one of the best that I've found.
Posted by Mrs. DeRaps