I love to recreate book covers! And, although I am a huge fan of the Hunger Games series, I have never loved the covers. I mean, I like them, but I don't love them. When the first book came out, my local bookseller promised me that I would like the book. I was not sold by the black and gold cover. It looked to Cold War or something. But, I bought it and read it and the rest is history.

But, now that Morgan at Smitten With Books is asking Mockingjay Countdown participants to recreate one of the three covers in the Hunger Games series. I chose to recreate Mockingjay, though I actually like it the best.  Here's what I came up with, after a couple hours of playing around: 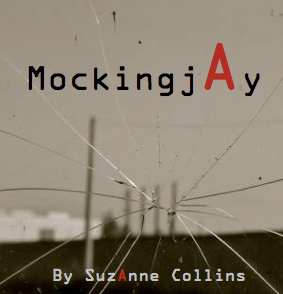 I was going for a darker, more rebellious-looking cover. I thought that including the red "A" would give viewers the impression that it related to the anarchy symbol. I haven't read this book yet (obviously), so I don't know how quickly this cover would stop relating to the chaos that existed at the end of the second book. I have a hunch that the craziness lasts for a while into the third book. We'll see!

What do you think? Too dark? Not positive enough? Feel free to let me know!
Posted by Mrs. DeRaps