From Dust Till Dawn Read-A-Thon: Challenge 2

The Unread Reader is hosting an awesome challenge with a great reward for one lucky winner. She's asking that participants in the From Dusk Till Dawn Read-A-Thon remake a cover from the Hunger Games series. The prize: A complete boxed set of the books in the Hunger Games series. There's still time to join in on the Read-A-Thon and enter this contest.

Since I've already remade the cover of Mockingjay eariler this week for another challenge, I'm going to choose Catching Fire as my next remake victim. I decided to go with a symbolic sort of cover for this remake. I chose an image with fire to stand for the rebellion that's heating up in the districts as the book goes on. And, the rose? Yes, that's for President Snow. I'm not a huge fan, but he is admirable as an out-and-out villain.


Here's what I came up with: 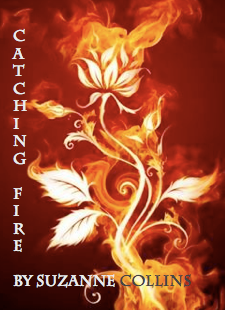