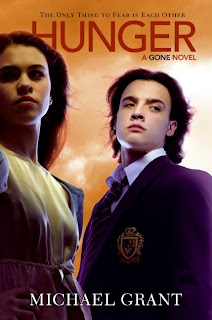 This book is the second in the Gone series. This is a six-book series; so think about this carefully before you start reading the first in the series. Because you can't stop. Or at least I can't!

Granted, it's been a while since I read the first book. I was honestly emotionally and mentally scarred a little by the first one. I'll recap quickly for anyone who needs it. In the first book, all adults over the age of 15 disappear. Instantly. Gone. The children who are left quickly fall apart into a chaotic mess. Within a matter of days, two leaders emerge. Brothers. One is good. His name is Sam. The other is evil. His name is Caine.

Hunger picks up right where Gone left off. There are no resolutions between good and evil, though "good" won round one. Hunger is the story of round two. And it's a doozy.

This second novel is aptly titled because most of the children are starving to death. There are serious food shortages and food is strictly rationed. Also, more and more kids are finding that they have special abilities (dream reading, flight, super-human strength, etc). This is probably caused by the nuclear power plant in town. Which is still running, still providing power to the kids of the FAYZ.

To add to the drama, because Michael Grant is some sort of evil sadist, there is an evil demon-like voice invading the minds of some of the kids. It's telling them to feed him. It's calling them to serve. For evil purposes. It's name is Gaiaphage.

This is book, like the first in the series, is a wild ride. There are no stops, no getting off. It's tension and drama and chaos and stress. And I'm loving it. I need to read book three (of six!), but I need to take a deep breath first. It's like I've just left a live-action soap opera where people are killed right in front of me. And those people are kids. And they're vicious. It's disturbing and awesome all at the same time.
Posted by Mrs. DeRaps