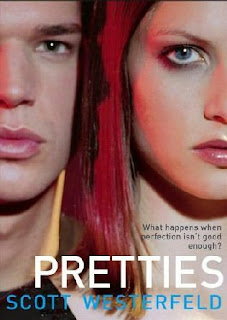 Scott Westerfeld's Pretties is the second installment in the Uglies series. It picks up a few weeks after the Uglies ended, with Tally a new Pretty. Because she's so new, Tally's life is filled with New Pretty craziness: fashion and parties and binge eating followed by pills to take away the effects of all the partying, eating, and drinking.

Soon after Tally turns pretty, she starts to have experiences where she becomes more and more "bubbly," aka aware. When she's aware, Tally has memories. Memories of the Smokies and David, the love that she betrayed when she was taken from the encampment in the woods. But, these bubbly moments are few and far between, so Tally cannot really put together much thought about the mission she'd planned before turning Pretty: to escape back to the Smokies and to be with David, her Smokie boyfriend.


At a party one night, Tally is having a great time. Until she is pursued by a masked stranger. When the stranger turns out to be a Smokie returned to remind Tally of her mission, will she listen? Can she listen? Or will her new Pretty brain override all of the individuality and free thought she had before the doctors put lesions on her brain?

I am a fan of this series. It's not super heavy or complex, but there are twists and turns that will keep you wanting more. There are some flaws in the plot, I think, but not so many that I can't overlook them. I am a huge fan of the dystopian genre, so this series appeals to me. I definitely plan to read the third book in this series, Specials, as soon as I can get my hands on a copy.
Posted by Mrs. DeRaps