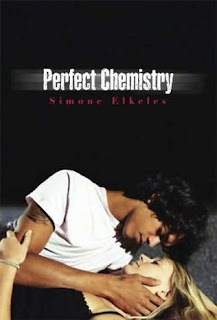 Perfect Chemistry by Simone Elkeles is a great summer read. It is light and romantic and full of drama and suspense, but it's not so heavy that you walk away feeling drained. At first, I thought it was going to be a sort of modernized Romeo and Juliet, but it's not really. I mean, it has a similar plot in some ways, but the romance between the two main characters feel absolutely electric and sustaining in a way that Romeo and Juliet's does not. (Sorry to R & J fans everywhere; I think that they had a major case of lust, not love.)

This story is told from the perspective of the two main characters, Alex and Brittany, in a back-and-forth fashion. Alex is a Mexican-American gangster. For real. He's tough and rough around the edges. He's a total bad boy, and I found myself falling in love with him.

Brittany is the opposite. She's totally blanca (my limited Spanish should be apparent) and holds herself to the image of perfection that she and her family have worked so hard to maintain.

Both teens have reputations to uphold. Both are popular in their own circles. Both are headstrong and opinionated and have problems that aren't visible on first glance.

So, when Alex and Brittany are paired together in chemistry, their fiery personalities collide. At first, they battle against each other, but under the flames lies a hidden truth: They have incredible chemistry, and not in the book sense.

I can't wait to read the next book in this series, The Rules of Attraction. Simone Elkeles is a great author; I'm happy to have discovered her!
Posted by Mrs. DeRaps