In this guest post, Tyger Tyger author Kersten Hamilton talks about the prevalence of domestic abuse in young adult books. I know that a lot of you are writing about this and talking about this on your blogs, which is awesome. Feel free to share the link to any of the posts/ discussion threads that you've started or participated in. Though many of us avid YA readers are adult, I think that we have to keep in mind the actual age demographic of most of our beloved books. They're teens. And female.

Here's what Kersten has to say about The “Romantic Abuser Meme” in YA Literature
I wasn’t expecting to write this post. I was in the midst of writing a guest post about books and my childhood (How far was it exactly from my house to the library I used to walk to when I was a child? The one where I learned to love books? Wow, look at that! Yahoo maps is amazing…) when I was distracted by a pretty cover.

I picked the book up and read it, and my “childhood books” post was completely lost—because suddenly I had to say something. And as a YA writer myself, what I had to say was a little scary because I run the risk of offending thousands of readers. No writer ever wants to offend a reader. But if I do not write this post, I will have let those very same readers down. So I am going to take a deep breath, gather my courage and write the post that is raging inside me.

There are some absolutely fantastic male characters in YA fiction today. (Team Peeta here!!!)

And then we have male love interests who are the modern embodiment of what I’ll call the “Romantic Abuser Meme.” A ‘meme’ is an idea, behavior, or style that spreads from one person to another in a culture. What we can and should expect from a romantic partner is definitely a cultural meme.

The “Romantic Abuser Meme” goes something like this: If someone threatens you, stalks you, tries to control who your friends are, even says he wants to kill you, it means he really, really loves you. And even though he is dangerous, if you are submissive/sweet/loving/pretty/special enough, he will not hurt you. You will tame the beast.

This meme is nothing new. It has been around in culture and literature for centuries. Sometimes it grows stronger; sometimes it almost flickers out.  Right now it is experiencing a resurgence to rival the renaissance in YA fiction. The book with the pretty cover was one in which it was very strong.

Let me put this bluntly. Rape or threatened rape is not sexy. Guys who want to kill you are not sexy. Relationships that start out with violence, control and bullying, either physical or emotional, do not end in true love. Ever.

Too many young women in our culture are facing abuse in real life relationships for us to shrug and wink and let it pass as a ‘romantic fantasy’ or mere ‘guilty pleasure.’

In Malcolm Gladwell’s book The Tipping Point he talks about how to make an idea ‘sticky’—how to ensure it makes an impact. It turns out that it has nothing to do with the idea itself. It has to do with the presentation. Wrapping the “Romantic Abuser Meme” up in a poignant, vibrant, and relevant story makes it very ‘sticky’ indeed.

In Influencer: The Power to Change Anything the authors state:

“Concrete and vivid stories exert extraordinary influence because they transport people out of the role of critic and into the role of participant. The more poignant, vibrant, and relevant the story, the more the listener moves from thinking about the inherent arguments to experiencing every element of the tale itself. Stories don’t merely trump verbal persuasion by disproving counterarguments; stories keep the listener from offering counterarguments in the first place.” **

‘Bad boy’ rule–breaking, authority–questioning characters can be lots fun. But when that ‘bad boy’ fits the profile of an abuser and if the ‘reward’ the girl receives for putting up with/being too weak to stop the abuse is True Love, the fun stops.

And if a little sister or friend comes to us and tells us that a guy is freaking her out, threatening her, trying to control her, isolating her from her friends, we don’t need to say, “That so sexy! He’s hot!”

We need to put our arms around her and tell the jerk to back off. Then call the cops if he won’t.

Because I promise you, real life abusers do not turn into soul mates that will love you for all eternity if only you are submissive/sweet/loving/pretty/special enough to tame their sick nature.

*  *  *
So, despite the heaviness of this subject matter, Kersten and I have teamed up to offer you all an awesome set of books. One winner will receive two books in this giveaway. They are: 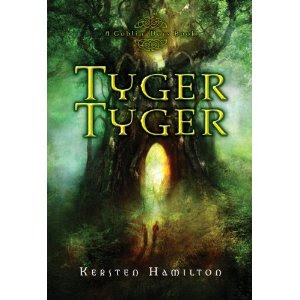 An ARC of Tyger Tyger by Kersten Hamilton
and

Split by Swati Avasthi
To enter, simply comment on this post with a statistic or fact about domestic violence/ abuse. I'm going to pull all of the stats you all collect into a larger graphic. I'm hoping that this visual will be a powerful representation of the reality of abuse in our nation. This giveaway is not international, but I hope that international folks contribute something about the reality of domestic violence in their countries.
If you cannot find a statistic, you may choose one that stands out to you at these sites (it's okay to repeat):
American Bar Association's Commission on Domestic Violence
Domestic Violence Resource Center
Alabama's Coalition Against Domestic Violence
10 Facts About Dating Violence
Thank you all for participating in this giveaway!
Be sure to enter my other Tyger Tyger giveaway, where you can win some bookmark swag!
Posted by Mrs. DeRaps