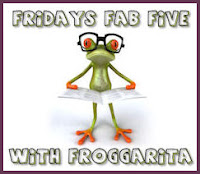 In this meme, Froggy of Frogarrita's Bookcase asks five simple questions so that we can get to know one another a little bit better. It's pretty fun and interesting. Feel free to join in if you want!

1. What new author have you discovered this year that is now on your auto-buy list?

Definitely Maggie Stiefvater. I read Shiver and was hooked. It'd read a shopping list if she wrote it. It'd probably be amazing!

2. What author have you yet to read, despite having most of their books in your TBR pile?

There are a few authors that I know I need to read. One is Melissa de la Cruz. I've never read any of her books, but love that lots of my students are hooked on her Blue Bloods series. I have several girls who would love it if I were to start reading and chatting about this series with them.

I never remember who I lend books to because I lend out dozens a month. And, I'm not one to get upset about a ruined book. I know that mistakes happen and that I've spilled stuff on books before. It happens!

4. Who's a favorite author that you'd read no matter what genre they write?

This is a  tough question, because my favorite YA authors tend to stay in their particular genres. But, there is one that comes to mind. I've read several selections from Patricia McCormick. My favorites are:

Sold, which is a novel told in poems. It's about a young Nepalese girl who is sold into the child sex slave industry. It's superbly written and powerful.

Purple Heart, which takes place in Iraq. It's about an American soldier who is injured in the war and who starts to question the validity of that war. It's well-written and the main character, a young male, is totally believable.

Cut, which is a short novel about cutting. The Chick Lit Book Club read this title a few years ago. It's gritty and realistic and was a great discussion-starter in our group.

I'll read anything that McCormick writes in the future because I've enjoyed each of these very different books. I'll look forward to whatever's next!


5. What's a favorite book that you go back to time and time again and won't let go of?

Well, this question is tough for me because I have so many favorite books and have lots of sets of books because I'm a teacher. I'm going to say that the book that I hold on to and teach every year, despite the fact that I could let go of it is Of Mice and Men by John Steinbeck. I look forward to reading it every year and have yet to get sick of it. It's generally one of my students' favorite reads. There's just something about the relationship between Lennie and George that pulls on my heartstrings year after year.

So, that's my Fab Five. I look forward to reading your responses!
Posted by Mrs. DeRaps