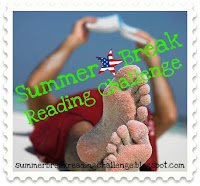 What a cool activity! Karin the Librarian, hostess of the Summer Break Reading Challenge, has asked participants to create a book cover using a few online generators. Using the sites she's provided, you need to create:

Here's my result and my description of what this book would be about, if I was actually going to write it: 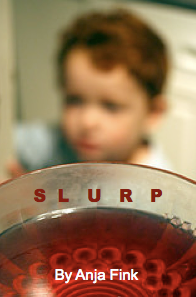 Told from two points of view, Slurp is the harrowing story of what alcohol can do to a family.

To everyone who knew her, Vanessa seemed to have the perfect life. She was a popular girl in high school. She earned good grades. When she became pregnant with her son right after high school and married her long-time boyfriend, her family and friends were thrilled. Vanessa seemed like she was excited, too.

On the inside, Vanessa was a wreck. She had always thought of herself as a girl who could make it out of her town. She envisioned a life filled with the hustle and bustle of the city. College. Travel. Independence. After she got pregnant and her boyfriend become her husband, Vanessa felt all of her dreams slip away. To numb her pain, she turned to alcohol.

For as long as Aidan can remember, his mother has always had a drink in her hand. Sometimes, he comes home from school and she's happy. On these days, she sings in the kitchen and makes dinner for him and his father. Other days, Aidan finds his mother in locked in her bathroom and crying. Or worse--Silent.


When an unexpected tragedy forces Vanessa to become sober, she is forced to look at the result of her years of drinking. Will she be able to remain sober for son? Can she salvage any of the dreams she once held so dearly?

* * *
So, this story sounds pretty gritty and emotional. It's interesting, because I went looking for a picture of a slurpy being slurped. (What a weird word, "slurp".) I thought that I could write a super cute little description for a teen romance or something. But, there were no such pictures. This one, a much darker image, stood out among all of the dog tongues and coffee mugs. This picture did not lend itself to a teen romance or a sunny story. It had to be depressing. But, I'm in hopes that this story would have a realistic ending, where mother and son both found a better life situation. I don't know what that would be, but I would hope to leave them in a better spot than where they started.
What do you think happens??
Posted by Mrs. DeRaps