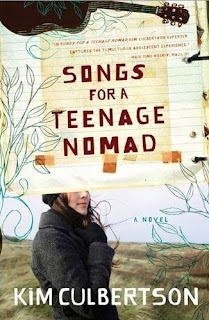 Kim Culbertson's Songs for a Teenage Nomad is like a great mixed tape. It's not so much a CD, because it doesn't feel as smooth and polished as a CD. It has a bit of the messy brilliance that a good mixed tape possesses.

This book is infused with music. The main character, Calle, uses music as a sort of best friend and a way to keep sane. Her mother is always in and out of relationships. When her mom's "in," Calle's life is good. When her's mom's "out," they have to move and start over again. This tumultuous sort of existence has left Calle with an awesome soundtrack of a life, but with very few actual friends and no sense of community.

That is, until Calle and her mother move to the sleepy ocean side town of Andreas Bay, California. Calle normally is pretty invisible in whatever school she's attending. In Andreas Bay, friends, possible love interests, and even a few rivals emerge fairly quickly. Soon, Calle's feeling right at home and loves it.

But, there is the lurking mystery that is her father. Her mother says that Calle's father was a selfish musician who abandoned his family for greatness when Calle was little. One day, when searching through her mother's drawers for a parka, Calle stumbles upon a letter from her father, begging Calle's mother to allow him to see Calle.

Shortly after Calle confronts her mother with this information, the relationship between her mother and her new husband is on the rocks. If this relationship doesn't work out, Calle knows another move is in store. She doesn't want to move and wants to find her father. So, she starts looking. And what she finds certainly surprises her.

*  *  *
I love that music is infused throughout this book. I love most of the bands and singers that Calle mentions. Everyone from R.E.M. to Bob Dylan to Ani DiFranco to India Arie are mentioned in this book. Dozens of musical figures. It's great.
But, there are all of these side characters that are only partially developed. Most are friends with Calle, but even her mother and father could be explained in a little more depth.
Even with these flaws, this novel is worth the read. It's quick and fun and poignant (at times). I kept thinking about how important music has been in my life, particularly when I was a teen. And, I thought about my students and the relationship that I see them having with their favorite bands and artists. This book would appeal to a musical reader. If you don't love music, particularly of the alternative/ classic rock/ singer-songwriter vein, then this read is probably not for you.
I'm actually going to be hosting a giveaway featuring this book later in August as part of the From Dusk Till Dawn Read-A-Thon that'll be hosted by Jami of YA Addict. To win this book, check back in late August and enter the contest. In the meantime, be thinking about the songs that define you. *Hint, hint!*
Thanks for the Smitten With Books ARC Tours for providing this read!
Posted by Mrs. DeRaps