The purpose of this feature, Book to Book, is to pair a YA title with a classic text. Some of you might be teachers looking to form a solid bridge for your students, others may be readers looking for an interesting reading combination. Either way, I can't help but pair books as I'm reading. It's an English teacher disease.

Teaching Charles Dickens is pretty interesting in itself. I find that students come in to a course where Dickens is being taught with a working knowledge of Tiny Tim and Scrooge. Maybe they've heard of Oliver Twist, but they definitely do not associate David Copperfield with anything other than a few Vegas-style magic tricks. Beyond this, there's not too much to draw on.

Nor is there an understanding of the Victorian Era, which started in the 1830's and lasted until 1901. It is an extremely interesting period in history (can you tell I'm a superdork?), and the issues that most interest me are highlighted in both of the books I'm pairing in this post. Here's the pair I'm suggesting: 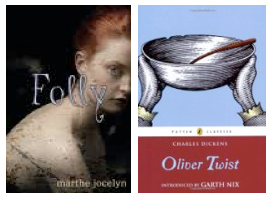 Marthe Jocelyn's new historical fiction called Folly is a modern look-back at the issues facing poor young women who found themselves in less-than-desirable positions in Victorian England. The main character, Mary, is basically kicked out of her home by an evil stepmother, only to find that she can barely survive as a servant in a wealthy London home. She has no training, other than what she's learned around the farm. More dangerous is the fact that she has no street smarts, and boy does she need them in inner-city London, where every chap seems bent on taking her innocence from her.

When Mary becomes pregnant, it is no surprise that she has no means with which to care for her child. What is shocking is the treatment that she receives as an unwed pregnant teenager. She and her child could die in the street, for all her former employers and coworkers would care. Luckily, there is an orphanage that takes in young children, as long as the mother meets a variety of qualifiers. Mary did and had to abandon her child to the care of the state.

Along with Mary's story, we hear one from a young orphan boy named James. He is a smart young boy, but is feeling the pains of life at the orphanage. The food is disgusting and there is a little too much discipline, but he has a roof over his head and clothes on his back. And, in this time period, he was a lot better off than most lower class children. There are shady characters abound in both novels, so there are a lot of discussions to be had there. There are also some sympathetic adult characters. Lots of connections.

This story has obvious parallels to Dicken's classic Oliver Twist. There is the whole orphan connection, the time period (which is about 50 years removed from Folly's), and the depictions of the social structure of Victorian England. But, what most helps me to recommend this pair is that the perspective of the mother in Oliver Twist is almost entirely left out of the narrative. Here, with Folly, the voice of the unwed mother in dire straights is born. With this pair, a more complete study of the politics, reforms, child welfare/ abuses, and the social expectations and realities for women could be explored.

This *almost* makes me wish that school were in session so that I could try this out.  Better to wait for September, I think. It's good to look forward to the start of school, even if it is only the first week of summer break!
Posted by Mrs. DeRaps