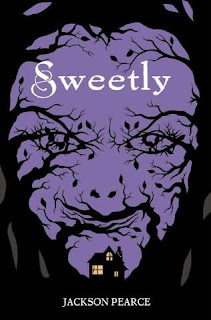 Jackson Pearce's newest novel, due out in August, retells the classic tale of Hansel and Gretel. Rather than two young children lost in the woods after their evil stepmother forces them out of their home, this is the story of Ansel and Gretchen. They have been kicked out of their family home, but these characters are teenagers on a road trip to find a new life. When their car breaks down in the town of Live Oak, South Carolina, they are directed to a sweet shop to look for work.

Sophia Kelly, a mysterious but kind girl, owns the shop and finds lots and lots of odd jobs for Ansel to help out with. Ansel and Gretchen lose track of time and the weeks roll on. Being so close to the woods, Gretchen can't help but be reminded of the twin sister she lost when she was little. This sister was taken by a witch and never seen again.

Gretchen is determined to be ready to fight off a witch the next time she sees one. But, there seems to be other dangers crawling around Live Oak, and in the house she's staying at. There are lots of unexplained disappearances of teen girls and Sophia Kelly seems to be to blame. When Gretchen discovers that Sophia id hiding lots of information from Gretchen and her brother, the entire ruse starts to unravel.

*   *   *
There are some fairy tale re-tellings that work rather well, and there are others that don't. There were some aspects of this story that I enjoyed, and I did read it to the end to figure out what would happen, but there was just too little in common with the original to make this story appealing to me.
At times, Sweetly almost felt like a whole other tale. I was dismayed that the elements that I loved in the original Hansel and Gretel are nowhere to be found in this adaptation.  That said, there are some merits to this story. I enjoyed the fact that Gretchen and Ansel are teenagers, that the "witch" is about their same age, and I liked the setting of a candy shop rather than a house made of candy.
Also, in the original tale, Gretel outsmarts the old witch and in this story, Gretchen is definitely the heroine. She was definitely my favorite character.
I wish that I could gush and rave about this book. I really, really wanted to love it. I will continue to read Jackson Pearce's books and fairy tales re-told. I open to re-tellings of old favorites, even if they are not as close to the original as I would've liked!
**ARC received from Book It Forward ARC Tours**
Posted by Mrs. DeRaps