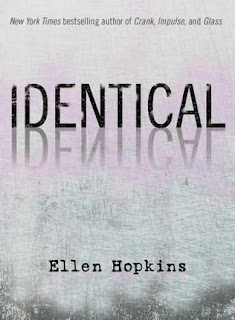 With Identical, I've now read all of Ellen Hopkins's books that are in print. I am officially caught up with her and understand the full body of her work.

This book, like all of the others in Hopkins's repertoire, is filled with edginess. This one, unlike some of the others that I've read, is so disturbing that I had a tough time reading it. Maybe I'm just emotional or something, but I had an almost physical aversion to a couple of the characters in this book. I think that this is a mark of good writing, because it takes a lot to make me feel physically ill just from reading.

In Identical, we meet two main characters. Sisters. Identical twin sisters. Kaeleigh and Raeanne. There are lots of ways that I could spoil this book by going into deep detail about these two characters, but I will not. I had to figure it all out on my own, and I don't want to ruin this for all of you who decide to read this book.

That said, I can talk about a majority of the plot of this book without giving too much away. The twins' father is a judge. Which is fairly ironic, because he is a demon at home. He's addicted to alcohol and prescription pills, and stated sexually abusing Kaeleigh when she was a young, young girl. And their mother is not much better. She escapes her duties as a wife and mother by campaigning around the country. Even when she's home, she's not really there. Everything is about image all of the time.

And Kaeleigh lives up to that perfect ideal. She does well in school, and is chaste. She has a bit of a timid personality, probably due to the abuse she's suffer at the hands of her father and the indifference of her mother. She's learned to cope with trauma by being quiet and calm. She's accepted her role in the family.

Raeanne is Kaeleigh's opposite. She is a rebel to the core and could not care less about her father and her mother. She does not take school (or anything else for that matter) very seriously. She has sex with lots of partners, uses drugs regularly, and is the very definition of reckless.

This book goes back and forth its narrative between these two sisters. Each section shows you which sister is speaking, but you almost don't need to know after a while because they are so distinctly different. I loved Hopkins's verse in this book and have a few new ideas for my classroom.

Many of my students, girls in particular, are rabid Hopkins fans. I know that this book will be a huge hit with these girls, and they will probably be just as disturbed as I was by the horrific abuse in this book. But, like me, these girls will want to read more and more of Hopkins's work. Because, like the drugs that she often writes about, these books are completely addictive.
Posted by Mrs. DeRaps