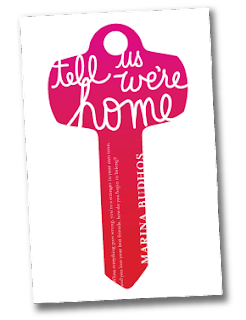 Recently, I had the opportunity to interview one of the main characters of Marina Budhos' book Tell Us We're Home. This book is about a strong friendship between three girls who find themselves united by a common thread: they are all the poor, immigrant children of maids in a wealthy New Jersey suburb. This book has been called a YA version of Kathryn Stockett's The Help. Here's my interview with Maria.

I am sorry to admit that you were not always my favorite person in this story. I was upset at you for much of this book because I did not always agree with the choices that you were making and the way that you treated some of the people in your life, particularly your mother. But, by the end of the book, I felt as though you has changed the most and I felt like I was super proud of you. How has this transformation affected your life for the better?

The biggest change is I feel more confident.  I’m not trying to please everyone all the time.  I think I kind of romanticized some kids, especially the American kids, like Tash.  Lola says I had stars in my eyes.  And maybe she was right.  It feels good to be a little more grounded.  Sometimes it’s a little harder, though.  I don’t get lost in my fantasy-head as much anymore.  And I feel as if I can see through some of the phony kids more.  But that’s probably good stuff—it’s what you need getting through high school.

I am not from an area of the United States that is even remotely like the one described in this story. I live in a rural part of the country where most people are very poor. There are some immigrants living and traveling through our state, but not in the isolated area where I live. Do you wish that you lived in an area where the average white people were less wealthy? Do you think that would have made a difference in the treatment that you and your family received in this story?

I can’t say I wish I lived in an area where the average white people are less wealthy, because I don’t know what that’s like.  I think it’s true that where I live I learned there really are all these levels to people.  What street you live on, what kind of car your parents drive, what camp they send you to—it all means something.  It’s a lot to understand and decode for someone coming from the outside.  So maybe in that way it might have been different if we were on the same economic level as everyone else.  But still, no matter what, it’s hard being different in any area, especially when a lot of people in my family don’t speak very good English.  And the impression I get is people have a lot of prejudice against Mexicans these days, so it’s especially hard for us.

I was appalled at some of the events that took place surrounding the treatment of day laborers and young men like your cousin, Renaldo, especially the game of "Jumping Mexicans." What would you like to say to those people who are willing to hurt another person just because of their nationality or immigrant status?

To realize that we are no different than all of you.  In fact, we have to do a lot of scary and hard things, just to be regular.  Like my cousin standing around in a parking lot, hoping someone picks him for a job and doesn’t throw a can at him.  Or my mother having to ride a bus really late at night, sometimes not in great neighborhoods.  Ever since the stuff with Renaldo, I’ve done some reading, and I’ve learned that a lot of people feel we’re taking jobs away from ‘hard working Americans.’  But I just wish they’d see how hard we work.  My uncle, he works all the time.  If his boss needs him for an extra job, he never says no.  The lights are on in our house all the time because somebody is always coming home from a shift, or a double shift, or some extra job. I just want people to understand that.

I love that you're a bit of a revolutionary by the end of this book. Who are your heroes?

My biggest hero right now is Sonia Sotamayor!  Can you believe we have a Latina Supreme Court judge! No, seriously, she’s my hero for other reasons.  She is calm and reasonable, and she got where she did through so much hard work.  I loved that story of her arriving at Princeton and she realized she was so far behind and she took the summer studying and reading all the books that the rich kids had already covered.  And now look at where she is!

You're in high school now. What are your plans, if any, for college? Will you continue to fight for human rights?

I think I learned that I am a fighter.  I didn’t know that about myself.  I hate hurting people’s feelings or having any big conflicts.  But I learned so much recently by being, well, not all that nice.  That sometimes you do hurt feelings.  And it hurts you inside, too.  But it’s worse to keep it all bottled up inside you.  Maybe that’s what human rights means.  That after a certain point, even those of us who want to stay nice, we can’t stand it any more.  We have to burst out.  We have to fight for what’s wrong.  We have to speak the truth.

I want to go to college, of course.  But right now I’m trying to focus on high school and not getting too distracted.  (There are a lot of cute guys, here, hey!)  But seriously, I’ve got a lot on my plate: doing my work, and being a part of clubs, and helping my family.  It is different for me.  I still have a lot of responsibilities at home.  And Mami, she’s proud of me, and she wants me to go to college, but I don’t think she wants me to go away for college, like most of these American kids do.  That would be too hard.  So I’m taking it day by day.  Change comes little by little, I guess.

And, I always try to bring every interview that I do back to my classroom. Right now we're studying the Universal Declaration of Human Rights in my sophomore English class. Do you feel that young people have the power to change the world for the better?

I totally do.  But it isn’t easy.  And I think I learned something too.  It’s not enough to just want to change the world. You have to ask Why do I want to change the world? Am I doing it because it makes me look good, or I feel a little better for a while? Or it makes me look cool in the eyes of other kids? That’s not enough.  You really have to want change because you think it will be something better for everyone.  Because you have a vision of what the world can be.


*  *  *
Wow. Thanks to Maria (and Marina Budhos) for this incredibly powerful interview. I love it when authors are able to capture the beauty, pain and truth of real life in their writing. This book, Tell Us We're Home, is painfully truthful, but ultimately inspiring. Thanks again!

Giveaway details: I have one copy of this book ready to send off to one US resident. To enter, simply comment on this review explaining why you'd like to read this book. This giveaway closes February 7th at midnight (EST).  Make sure to leave an email with your comment so that I can hunt you down if you win!
Posted by Mrs. DeRaps