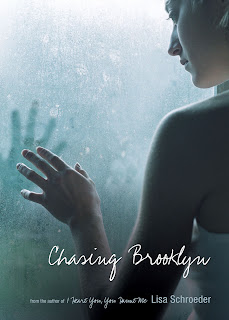 In this novel in verse, Brooklyn lost her boyfriend, Lucca, in a tragic auto accident. Lucca's best friend Gabe was driving the car when Lucca died. Almost a year after the fact, Gabe cannot forgive himself for his role in the accident and commits suicide. Once again, Brooklyn is left alone.

But not for long. Because almost as soon as Gabe is gone, he's starts coming to Brooklyn in haunting nightmares. Every night, she slips further and further into pain and terror and farther away from the happy life she once had.

That is until Nico, Lucca's brother, reaches out to help Brooklyn. She doesn't know why he all of a sudden decides to contact her, but she's grateful for his company and his offer to train with her for an upcoming triathlon. The exercise and companionship drives away some of Brooklyn's nightmares and her sadness. What she could not guess is that Lucca's ghost is leaving cryptic messages for Nico, asking him to help Brooklyn.

In back and forth narratives, a complex story of loss and love is told by Brooklyn and Nico. The verse is spare and not at all frilly or in excess. It is clear and simple, even when the subject matter is not. The result of the use of verse in this novel is that the story is laid bare, with all of its painful rawness and the beauty of human connection shining through. I loved that Brooklyn and Nico found each other. I feel like their relationship developed logically and was not hasty in its growth.

The ghosts in the story are very present, which makes it tough for Nico and Brooklyn to cope with their loss. I have never lost a loved one that is as close to me as Lucca was to Brooklyn, but I can't imagine that I would want to let them go if I could sense that they were with me all of the time. Lucca's presence seems comforting and distracting for Brooklyn and Nico. Comforting that they know he's there and not angry or suffering, distracting in that they cannot resume their lives with him there.

I really felt for the characters in this story. Have a little posse of students (all female, mostly sophomores and juniors) who read nothing but novels in verse. So, I read a ton of them to pass on to these girls. I think that this one will be well-received. They all loved Lisa Schroeder's Far From You, and I am going to have to get a copy of her first book to read and pass on to them. I want to keep these girls satiated in their desire for more novels in verse!
Posted by Mrs. DeRaps