Book Review: Wolves, Boys, & Other Things that Might Kill Me by Kristen Chandler 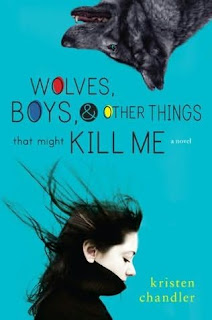 I bought this book not really knowing what it was about. The cover is absolutely gorgeous and I love the original title. This is pretty much all that it takes for me to make a book purchase.

At first glance, I thought that maybe this book was another Shiver or 13 to Life. It was not. It was not paranormal in any way. It was about a girl and actual boys who do not (at any time) turn into wolves.  Nothing unrealistic. Actual wolves, actual people.

After I realized that this book was not paranormal, I settled into actually reading it and not searching for clues about a potential boy, Virgil, who I thought might be a werewolf. In actuality, he was just a normal teenage boy who has the hots for the main character, KJ. KJ is a strong female lead character. She lives on the outskirts of Yellowstone National Park with her father who is a guide and a local sportsman's store owner. He's gruff and a little on the stoic side, but not a horrible father as far as YA goes.

KJ is a tough cookie. She's an assistant guide and knows her way around the woods and around guns. She loves to write and is smart. When she signs up for the journalism class and gets to work with the new boy, Virgil, she's pysched. The teacher suggests that Virgil and KJ work on a column together--Wolf Notes. There is a large population of wolves in and around Yellowstone and the teacher thinks that Virgil's amazing photographs and KJ's stories would make for a great column in the school newspaper.

It's a great column for stirring up controversy. Local ranchers have been losing cattle and sheep to the wolves for years and are fed up with nature lovers and "tree huggers" who seek to protect the wolves. When violence erupts in this quiet town because of KJ and Virgil's efforts, KJ feels like she's to blame. Worse, her father's store mysterious catches fire and Virgil is shot at. There's no going back and it seems that there's no going forward with the town completely divided on this issue.

This is an interesting novel. I did not absolutely love it, as it was a little slow for my taste. But, I think that there are lots of readers who would be fascinated with this topic. It was not poorly written or sensationalized. I know that there have been efforts to reintroduce wolves in Maine and similar controversy has ensued.

This book would be great for a teen or an adult who is concerned with the reintroduction of wolves from Canada to the Northern United States. It brings up a whole host of issues along with the wolf topic. And, there's a nice little love story/ mystery to go along with it. It was an afternoon well-spent.
Posted by Mrs. DeRaps