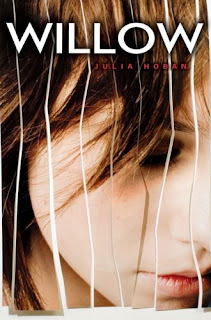 I've read other books that deal with teens who self-mutilate, but none have been as engrossing, developed, or as realistic as Julia Hoban's Willow.  In comparison, other titles feel a lot more shallow and less holistic. Willow is nothing short of disturbing and breath-taking.

In this book, Willow is a smart, authentic-seeming teenage who is living a nightmare. She has labeled herself a "killer" because she was driving the night that she and her parents suffered a fatal car accident. She is the only survivor. Never mind that Willow's parents had that second bottle of wine and were too impaired to drive home, never mind that the rain was torrential, never mind that Willow only had her learner's permit. She blames herself and wants everyone else to.

Too ease her pain (or possibly to validate it) Willow begins to cut herself. I have never read a book that describes this process, mentally, emotionally, and physically in such excruciating detail. It is sickening in its reality.  Willow successfully hides her addiction to cutting successfully until a boy named Guy catches her doing it. After this, Willow makes him promise not to tell anyone. He agrees and they begin a rocky but intensely close relationship.

Normally, I would want Guy to tell someone quickly so that Willow could get help. This is me as a reader who works with teens every day. This is me as an adult looking in a judging Willow and Guy and wanting someone to help Willow, to force her to change. But, that would not make such a compelling read. Because the relationship between Guy and Willow is so authentic, so based on feelings and fears and mutual respect that I don't want that to be messed up with Guy telling on her. But, I don't want Willow to continue cutting, either.

In this way, the author puts the reader in Guy's shoes. If he tells, Willow may be forced to get help. But, if she's not ready for help then she will continue to cut (or try another route to ease her pain) without actually working through her sadness and loneliness and pain. Sure, Guy is a teenager and cannot be expected to take on Willow's problems, but I do think that he does a great job of caring about her as a person. He helps her work through her problems in a natural, caring manner. He's not looking for sex, but for her companionship. This is refreshing.

I would hope that teens (and adults) who read this book understand more about the psychology behind cutting. I don't hope that teens (or adults) will try to take on the problems of someone who is cutting; that is scary to me. But, I do recognize that friends have an enormous role in the lives of those who are hurting. I think that Guy models an engaged, concerned friend who just does not know how to help someone who is in as much pain as Willow.

This book is a must-have for high school libraries and classrooms. I have worked with students in the past who have arms scarred up and down from cutting. I feel like this book has allowed me some insight into this world, of which I admittedly have very little understanding. I will definitely put this book in my classroom and use Willow's story as a point of reference for future situations where I find that a student in my care is self-mulitating.

If you've read this book, please let me know what you thought.
Posted by Mrs. DeRaps