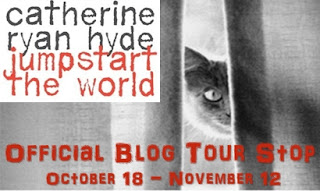 I read this book in one sitting. I had been saving it for a Sunday afternoon because I knew that it was going to be an easy-to-get-into read and that I wouldn't have to put it down. What I didn't plan on were the range of emotions and the huge revelations that I'd have about relationships and identity and human nature. I guess you just can't schedule that stuff in.

I've never read a Catherine Ryan Hyde book before, but now I want to read all of them. She created some of the most realistic teens that I'd ever read about in the space of less than 200 pages. Not that there is a page length requirement for reality, but I was just impressed at how quickly I recognized these characters as real people.

Jumpstart the World is the story of a teen girl named Elle who is struggling and lonely. She is alone in a way that a lot of teens I know are: Her mother is otherwise occupied in her own life, and friends don't come easy. Even more, Elle doesn't seem to be very comfortable in her own body or in her thoughts and feelings. She's a little emotionally bankrupt at the start of the book. So, when she meets her new neighbor, a kind man named Frank, she is surprised at how quickly she feels a connection with him.

Frank is a great listener. He's in his thirties and is interesting. He works as a vet tech and eats homemade chicken noodle soup made by his girlfriend. Quickly, Elle and Frank forge a friendship and a habit of good talks out on the fire escape.

And Elle starts to make friends at school. Sure, they're a little different. Outcasts, even. But they genuinely seem to like Elle and accept her for her eccentricities. She even has them over for a little "party". But, when Frank comes over for a quick hello, Elle's view of him changes. Her friends point out that Frank may be transgendered. Elle cannot deal with this, and the fact that she may have a crush on Frank. Because what does that say about her?

This cast of characters, this setting, this set of issues and problems seems very real to me. Yes, there are some less-than-plausible situations and parts of this story, but it rings true on the whole. I am happy to have this book on my classroom shelves and hope that it makes its way into the hands of someone who needs it. Whether that person be someone who's questioning their own sexuality, or thinking about identity in a much more general sense, I think that it has the potential to help.

And, I have one copy of this book for one of you! To enter, simply leave a comment with an email address. This contest is open to US residents only. Sorry to my international friends! A winner will be drawn on Monday, Nov. 15th.