Recently, I had the opportunity to interview one of the most realistic characters I've ever met. His name is Jace, and his story is told in Swati Avasthi's novel Split. It's a fantastic read. It's a must-read.


I am an English teacher and students sometimes use writing assignments as a place to open up about their troubles. If a teacher were paying close attention to you, would they suspect that something was going on at home? Did you give off signs that others missed?

Probably not.  I was pretty decent at hiding it. Practice makes silent. The what-happens-at-home-stays-at-home policy wasn’t just to protect my dad; it was a survival strategy for me, too.  Schoolbecame a sort of sanctuary for me.  For hours upon hours, I was a regular kid.

Could my teachers have figured it out if I wrote something about it?  Well, there's the rub.  I would never written anything about it.  If I did, I’d have shredded it.

So, maybe that’s how they could have figured it out -- from what was not there.

Suspicious Absence:  I never took a picture of my parents, my houses (not even when we moved), or a self-portrait.

Your father is a judge, which is an interesting profession for someone who is so violent and controlling. Do you think that your experiences with you father have colored your relationship with authority figures?

Colored?  Too mild.  Try damaged. Authority figures who think that they've earned my respect because they are in a black robe, carry a badge, or even just stand in front of a blackboard, aren't the ones I'm wild about.

Authority figures who don't inspire mouthy comments are the ones who have earned my respect.  Christian is sort of an 'authority figure'.’  I listen to what he has to say because he's got good judgment and gets me.   He doesn't force me to accept rules, anymore.  Instead, he explains why. Like I call him if I'm going to be late; I get that he worries if I'm not home.  That’s the kind of authority figure that works for me -- the kind that works with me.

What would you say are the warning signs that a girl should look for when dating a boy or man who is a potential abuser? What clues should your girlfriend or your mother have taken as a sign to get help?

I wish my mom had paid attention early.  When my mom and dad started dating, she'd never have put up with his crap. No one starts out as a victim; they are groomed into it.

Insults graduated to name-calling graduated to a fight where he grabbed her arm.  When she tried to call him out on it, he'd call her his very own, little drama queen, all affectionately.  He could charm and demean her all at once.

He eroded her barriers slowly.  Like how he got her to quit her friends.  He would sulk when they were with her friends and turn on the charm around his. She got the message.  You want the happy version?  Hang out with him in his style with his friends. And one day when she was mad at Lindsay, he told her Lindsay was never good enough for her anyway.  So...

Warning Sign No. 1:  He wants you all to himself -- to the point of isolating you from friends and your family.

Warning Sign No. 2:   He controls things that have nothing to do with him.

Do a mother-check.  If someone told your mom what to wear on her date, or that she should be less this or more that, wouldn’t you tell that creep he  should go … (PG-version) jump off a cliff?

Warning Sign No. 3:  He wants to know where you are all the time.

I used to walk Lauren from one class to another, saying she deserved the royal treatment.  It was actually an excuse to make sure she wasn't flirting with other guys. If he can’t let you out of his sight, it’s not romantic.  It’s creepy.

He’s got you groomed.  He’s erased those boundaries, the lines in the sand.

My advice:  you're no one's cure.  And why should you be?   I get that it's great to be needed, but you can be needed in better ways -- ways that are about who you are, not who you aren't.

Is there help for you? Do you feel like you're doomed to be an abuser if you grow up in a home like yours or are you able to change?

God, I hope so.  Deeply, deeply hope so.

Whenever I get discouraged and start thinking I am doomed, that I'm genetically pre-conditioned into repeating my dad's *&$& ups, I remember Christian.  He didn't come out of my house with his fists raised.  It would be easy just say, "Yes, I'm doomed," and let my fists find their home.  Saying I'm doomed is just another way of letting me off the hook.

And if it means that all my life I am vigilant – they’re worse things.  I've seen them.  Hell, I've been them.  Vigilance is an easy price for what I get in return.

I am moved your story and imagine that there are many other readers who feel similarly. What can we do to help end domestic violence and teen dating violence?

If anyone tells you they know the answer to this, check that you have your wallet.

We can start talking to guys.  It’s up to us guys to tell other guys that hitting someone you love is seriously messed up. We need guys like Christian. Remember that argument between him and Mirriam, the one eavesdropped on?  Christian didn't back down; he backed away.  Backing away and starting clean -- that's not unmanly.  That's manning up.

Now not all abusers are guys and not all victims are girls.  Which is another reason we need to talk to guys.  Face it; it’s hard as a guy to admit anyone is beating on you, much less his girlfriend. So, we've gotta talk to guys about that, too.

*     *     *
I have to admit that I got a little emotional just reading Jace's answers to these questions. It was hard for me to write these questions; I did not take this task lightly. If this were another book, another subject, I would've had some fun and played around a little. I could not do that here. And, Jace wouldn't have wanted me to. I've read this book twice, and know Jace. He's serious. He's angry. He's not someone you want to joke with. So, I spend a week or two thinking up these questions. And, Jace answered them. His voice and his character are present in these answers. If you are at all curious about this book, please read it. If you are a secondary teacher, please make this book available to your students. And, if you or someone you know is being abused, please find help. 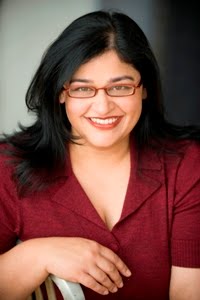 Ms. Avasthi is raising money for the Family Violence Prevention Fund. Here are two of the amazing items that are being auctioned through this project:
From Andrew Karre: Critique of 2000 words of manuscript

From Tina Ferraro: Personalized, signed copies of all 3 of her novels

Bid on something you're interested in, donate a few dollars (or more), spread the word.
However you help, please help!
Posted by Mrs. DeRaps