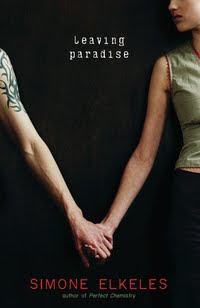 One of the reasons why I love modern young adult lit so well is that it tackles subjects and issues that teens deal with all of the time without apology. Sure, there were some great YA authors when I was a teen, but there was nothing like Leaving Paradise by Simone Elkeles.

Every year around homecoming and prom, I become nervous. I know what it's like to be a teen and I know that I made some poor choices when I was younger. But I lived through my poor choices. I worry that my teens (as in my students) will not survive theirs.

Hopefully, books like Leaving Paradise will make their way into the hands of teens and show them the consequences of a seemingly small decision--driving after too many beers--in a way that allows them to work through the after affects without having to go through them personally.  Leaving Paradise is about a boy who makes a life-changing decision after drinking heavily at a party. Because of his choice, which was made in a plot second, he has to spend one year of his life in jail. And the rest of his life will be spent thinking about the girl who put him there.

Her name is Maggie. She was walking home after the party and did not see the car coming at her until she had already been hit. One year later, she is still in pain and her post-surgery gait draws stares and giggles from her classmates. Once popular and athletic, she is now afraid to go to school.

But, when Caleb gets out of jail early, both will have to face each other and the events of that tragic evening. This is a moving book that I won't soon forget. I plan to read the sequel, Return To Paradise, so that I can see what happens with these characters.
Posted by Mrs. DeRaps