Book Review: I Am Number Four By Pittacus Lore 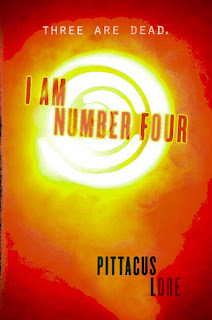 When my husband first saw the previews for Avatar, he was beside himself. He wanted to see it so badly. He pleaded and begged and finally I caved and went to see it with him. To my absolute and utter amazement, I loved it. I thought it was such a great story that could easily relate to what those who have colonized our planet have done to native peoples and the environment.

I Am Number Four is not the exact same story, but I definitely felt like there were connections. It tells the story of a teenaged John Smith (aka Number Four), who is an alien on the run. He was born on the planet Lorien, which is described as being similar to Earth but smaller. John's home planet was invaded some years ago by another group of aliens--the war-prone Mogadarians. As it turns out, the Mogadorians ruined the environment of their own planet, as well as Lorien. Now, they want Earth.

But, in order to take control of Earth, they need to kill off the nine children who left their home planet just in time. These teens are now starting to develop their Lagacies (super powers) and the Mogadorians need to find them before they become too powerful.

From the very beginning of this book, I was hooked.  I just couldn't put it down. I felt for John, who just wanted to be a normal teen, but also wanted to protect the home planet that he barely remembers. I think that the messages about the environment and the poor treatment of those we consider to be "other".

I think that certain parts of this book were a little rushed, and character development suffered a little because of the pace and action. But, I found a deep connection with the main character. I will definitely read the next book in this series.  I am not one to read a lot of science fiction, but I thought that this read was less science fiction-y and more about humanitarian and environmental issues. I thoroughly enjoyed it!
Posted by Mrs. DeRaps