Book 2 Book is an idea that I had based on some conversations with fellow educators. Most English teachers that I've talked to do not participate in the YA blogging world and some are not readers of YA to the (crazy) extent that I am. Because they are not as interested or well-versed in this world as some of the bloggers I've met in my travels around the blogosphere, they might not know about the abundance of great YA available. And, so much YA can be used in the classroom because it connects to the classics that we teach.

For this Book 2 Book feature, I'm going to compare/ contrast a standard classic that is taught in many high schools around our country to a new book from a first-time author. I'll start with The Unidentified, which is due to be released in early October. I read it as part of an ARC tour hosted by Dark Faerie Tales. 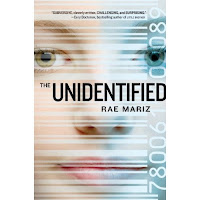 Rae Mariz's The Unidentified looks critically at the consumerism and materialism that has become an obsession in today's world. In a not-too-distant future, Mariz shows us where this devotion to all things "branded" will land us: Schools in old shopping malls, students vying for sponsorships rather than scholarships, and greedy companies who use children as pawns in marketing campaigns.

Even though everyone around her is connected and plugged-in all of the time, Katey (aka "Kid") is feeling like she doesn't belong. She knows that she doesn't have the skill or the inventiveness that it takes to start a new trend or become "branded" (sponsored) at her Game (school). She has a few friends, but doesn't have tons and tons of followers like others in her level. Her mother doesn't make enough money to allow Katey to sport the latest trends, so she is unlikely to go very far in her level.

This starts to change when Katey witnesses something that others don't a prank pulled by a seemingly-subversive group called The Unidentified. As Katey sleuths around, she is pulled deeper and deeper into a world where teens are refusing to play by the rules of the Game. Though she is terrified that she'll disappoint her mother--or worse--end up with "Game Over" (expulsion), she cannot help but be lured in by those who seem as disenfranchised as she feels.

Ray Bradbury's classic Fahrenheit 451 tells of a disturbing future where firemen are no longer meant to put out fires, but start them.  In this dystopian world,  average citizens are not allowed to read or possess books, and are encouraged to become mindless consumers. Montag, the central character, is a respected fireman, but starts to question the reasons behind the book ban. After stealing a book from a fire he and his crew started, Montag is drawn into a world where he learns of a network of fellow dissidents.  After learning about this rebellious group and feeling the power of the written word for the first time, Montag sets into motion a plan that will alter the course of his life--and the country's--forever. 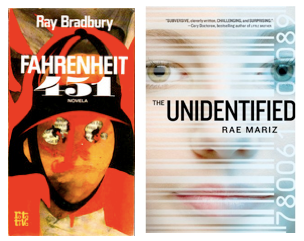 Every time that I read Fahrenheit 451, I am struck by the lack of information about the life of teenagers in a book-free, virtual world.  There are a few references to schooling, where students play games all day and to reckless teen pranksters, but there's not much more than this to be found in Ray Bradbury's account of the future. I've often wondered what a parallel text might show about the life of an average teen in the world of Fahrenheit 451.

As I was reading The Unidentified, I felt like I had found some of the essence of Bradbury's vision for schooling in a world where reading and writing were nonexistent. Though books and writing are not forbidden, they are not encouraged in the fast-paced world of The Unidentified.  There is simply no time to read or write between gaming and chatting and inventing and socializing in this world. Sure, students have classes, but they are all about technology and often are related to buying and selling. There is no room for fictional characters or poetry in the Game.

What struck me as most similar is the prediction of the reliance and escapism provided by technology in both books. In Fahrenheit 451, huge televisions became the "family" and dominated daily life. In The Unidentified, constant online drama and gaming replaced actual conversations and relationships. Both books also predict some relationship with drugs as a means of escaping the void of daily life. This was emphasized much more heavily in Fahrenheit, but can be found in The Unidentified as well.

Both books are great separately, but could easily be taught in tandem. The Unidentified will show an aspect of the future that Bradbury gives a brief nod to, without explaining in depth. I recommend both texts highly to any lover of dystopian literature. I will definitely be purchasing my own copy of The Unidentified when it's released!
Posted by Mrs. DeRaps