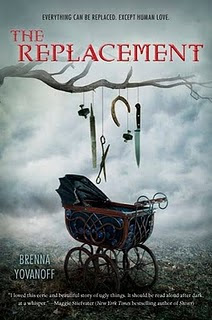 Ever since I first laid eyes upon the cover of this book, I knew that I had to read it. I was hoping that it would be a creepy, Edward Scissorhands type of read. In several respects, I got exactly what I'd hoped for in this novel, but there was also more than I had bargained for.

The main character, Mackie, is a replacement. Simply put, a human baby was stolen from his crib one night and Mackie was left behind in his place. He looks, acts, and feels like a human but there are many differences that keep him from fitting in with the rest of the people in the small town of Gentry.

For starters, Mackie is deathly allergic to blood, iron, and consecrated ground. Whenever he needs to get a haircut or eat in the cafeteria, he gets sick and starts to turn blue. Every day chores and routines become deadly for Mackie if any blood or iron happens to come near him. It's a tough life to maintain and it isolates him from many of the people in his town.

Why? Because Mackie and his family are trying to keep his replacement status a secret. You see, the people of Gentry have long dealt with the creatures of the underworld, who exist in a realm called Mayhem underneath Gentry. The people of Gentry know that their children are being killed and taken away, but they choose to ignore this to keep a quiet balance between good and evil in their world.

It hasn't always been this way, though. In other times the people of Gentry rebelled against the replacements and violently killed them. Mackie and his family know this, so he lives a sort of double life. His sister and his parents protect him from the thousands of debilitating objects that surround him and the stares of the curious in the town. But, despite all of their efforts, Mackie is getting sicker and sicker. His skin is pale and he has very little energy.

When his sister ventures into the underworld looking for a cure for Mackie's illness, she sets of a chain of events and unwittingly unravels a mystery that may rock the balance of the two worlds forever.

If you're into picking up a creepy, dark read, this may be for you. I can't say that I was absolutely riveted to it while I was reading, but it was entertaining and thought-provoking. Mackie was an interesting character and the imagery in this book was enough to turn my stomach (in a good way) at times.

I'd say that this is a successful first novel for Brenna Yovanoff. I look forward to reading whatever she comes out with!


**Received from the Book It Forward ARC Tours**
**Counts toward the 2010 Debut Author Challenge hosted by The Story Siren**
Posted by Mrs. DeRaps