Book Review: The Dead and the Gone 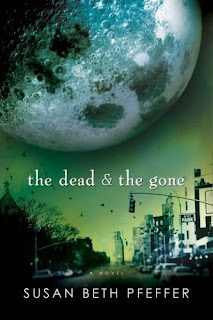 How is it that every time I read a book by Susan Beth Pfeffer I start counting the number of canned good I have on hand? Oh, right. Because she makes me believe that the world is ending and that I'm going to starve to death at any moment!

Don't get me wrong. It's weird and twisted, but I love the fact that she is able to convince me that I have a matter of weeks before I'm gone. Her writing is so convincing, and her characters are so believable that you can't help but feeling like you need to rush through the pages to find out whether they survive or not. And, not everyone survives.

The plot of the book is this: The moon has been hit by an asteroid. It is now much closer to the Earth, so there are lots of tsunamis and earthquakes and volcanic eruptions. The natural world no longer behaves (if it ever did). People panic. They start hoarding food and there are shortages of the basic necessities all over.

This book takes place in New York City, which is about the last place that I'd want to be if a disaster such as this struck. I wouldn't want to be in any city for that matter. Way too many people and way too little natural resources.

But, the main character of this book, Alex Morales, has a large network of family, friends, and church members who are willing to support him and his two younger sisters. But, his mother hasn't returned from work and his father is stuck in Puerto Rico. He wants to step up and take care of his siblings, but he's only seventeen and doesn't feel like he can live up to the example set by his loving father.

Whether he likes it or not, Alex is in charge. He has to find a way to keep himself and his sisters alive until his mother and father return. And, with every day bringing a new problem, a new unknown, this task will become less and less simple as his story progresses.

If you are at all a fan of dystopian literature or the author or of the environment, you should read this book. There is a first book in this series, but you don't have to have read it (for real) to enjoy this one. Apparently, the two stories converge in the third book, but not until then.
Posted by Mrs. DeRaps