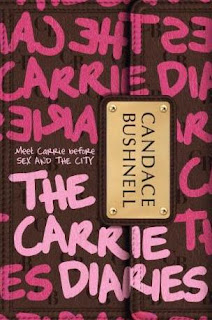 I'm not gonna lie. I was super excited to read this book. I am (was?) a huge fan of Sex and the City when it was a TV show (I haven't loved the movies as much) and watched it every week while it was running. Though I am familiar with all things Carrie Bradshaw, I didn't remember her talking too much about her childhood on the show, so I thought that this was going to be awesome.

And it was. Kinda. At first, I had a really hard time getting into the voice of the main character. But, once I gave in and channeled Sarah Jessica Parker's voice, I was all set.

In this prequel, Carrie Bradshaw is a senior in high school. She is fashion forward and quirky, just like in the TV show, but I was surprised by the lack of genuine girlfriend-ships in her life. She was not the Carrie surrounded by a group of savvy advice-offering women at the end of a tough date. Apparently, Carrie's high school friends were pretty self-serving and just plain bitchy.

Carrie doesn't fare any better with the boys. She crushes on the new boy in town, Sebastian, but doesn't really have all that deep of a relationship with him before (SPOILER) her "best" friend takes him away from her. Maybe this is setting us up for her tolerance of Big in the TV show? I don't know. But, I wanted her to have a little more chutzpah or something and give Sebastian and her ex-best friend a little what-for. She didn't.

The book did segue nicely into her interest in New York and creative writing. By the time the book ends, Carrie is safely in the hands of (SPOILER) Samantha Jones, who is saving Carrie from a major debacle for the first, but not last, time.

This is an entertaining read. It grew on my as I read. But, I don't know that the time period, 198? is going to appeal to too many teens. I think that a Sex in the City fan might like it better than the average reader, but I could be wrong.