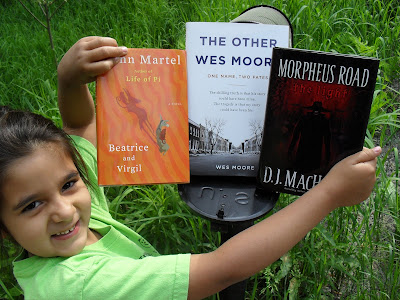 This weekend, I had a special helper in creating my In My Mailbox post this weekend. This meme is hosted by Kristi of The Story Siren. My niece, Sophia, thought that this was an awesome idea, although she was at first quite perplexed as to why we would put books in the mailbox without stamps or envelopes. I explained that I'd put a picture on the internet to show off the books I'd received during the week. After this cursory explanation, she was sold!

Before heading off to my mailbox with the books, Sophia gave an explanation of what she thought each book was about, based on the cover. (She's a beginning reader and just finishing kindergarten, but in my eyes she's a budding genius.) Here's what she thought:

Morpheus Road: The Light by D. J. McHale. Won from Books By Their Cover!
Sophie says: "This book is about a boy witch. He's evil and scary. This book will give nightmares to people. But people should read it if they like to have scary nightmares."

I say: Absolutely. I love scary nightmares and evil characters. I guess that I'm going to love this one!

Beatirce and Virgil by Yann Martel. For review from Random House for Teachers.
Sophie says: "This book has a donkey like in Shrek. This donkey has a friend that's a monkey and they go on a trip through a desert that's like an ocean and it's hot like the inside of a volcano. At the end, they find their friends in a jungle. I like this one the best."

I say: I loved Martel's Life of Pi and have heard a lot of great reviews about this book. I hope that it ends as peacefully and happily as Sophie predicts, because Life of Pi was disturbing (in a good way), to say the least!

The Other Wes Moore by Wes Moore. For review from Random House for Teachers.
Sophie says: "This one's about the future. And the past. Both. One side is happy and the other is sad."

I say: Didn't I say that she's a genius. Seriously! I've heard a lot, lot, lot about this book. One Wes Moore (the author) is born and raised near another Wes Moore. They live in the same area and have the same name, but their lives take drastically different paths. One is a wanted criminal and the other is a Rhodes Scholar. I can't wait to read it.

Sophie and Shady walking to the mailbox. An "aw-shucks" moment for sure. 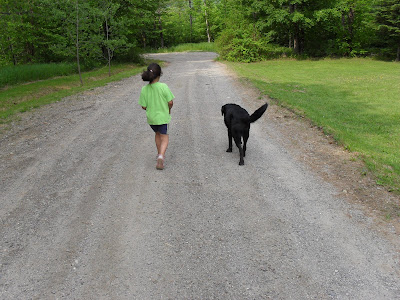