Guerrilla Poetry Attack: One Line at a Time 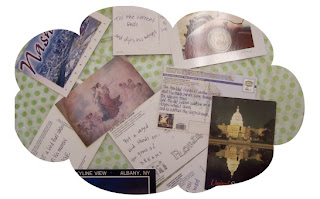 Later this month, I'm taking my mother to a Maya Angelou reading at the Augusta Civic Center. It's pretty darn exciting. Or, I'm excited. My mother doesn't know that we're going because it's an early Mother's Day gift to her.

To keep her in the dark but to get her thinking, I decided that I would send her a post card every day for the next few weeks with a line or two from Maya Angelou's famous poem "I Know Why the Caged Bird Sings". This way, she'll get all hyped up about our outing without knowing exactly what's happening. I've included a snaphsot of some of the postcards that I've written out in advance for this project.

I also sent a warning to her on a postcard. She called me yesterday to confirm that she had, in fact, received this warning. I bet she'll be paying closer attention to her mailbox for the next few weeks!
Posted by Mrs. DeRaps