Today, I have the pleasure of interviewing Kelsa, the main character of Hilari Bell's new novel, Trickster's Girl. I am also giving away my ARC of this novel to one lucky commenter, so stay tuned. 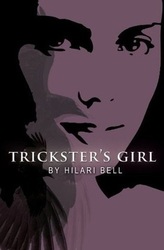 I love a strong female lead! You persevere where most would give up. Where did you get this strength of character?

My dad taught me a lot of things, and one of them was to love nature and the world around me.  He would never have given up--he didn't, until cancer killed him.  And when I found out that one of the reasons his cancer was so virulent was because the leys were dying, I couldn't quit.  Not as long as there was any chance I could succeed.

Your passion for the environment is one of the main reasons that you decide to help Raven in his quest. Most of us will not have this opportunity. What are a few things that we can change about the way that we treat the Earth so that we can avoid environmental devastation?

Global warming was one of the greatest threats to the world--just a hundred years ago the Florida islands weren't islands!  And there were people, congressmen, who denied the existence of human-caused climate change right up till the tides started rising--can you believe it?  Just paying attention to what's going on, and voting for people who will pass laws that protect the environment is a good start.  And frankly, not grousing too much when your energy bills rise, or your gas taxes go up, because for our long term survival those things need to happen.  And who wouldn't by an electric car?  Those people in the past were idiots--and they thought way too short-term.

I've been thinking about how security-crazed your world is. I know that right now, politicians and officials have tried to use increased security as a means of making us feel "safe." Do you feel safer with cameras everywhere, DNA testing, your PIDs (Personal Identification Cards), or do you feel restrained by these security measures?

I have to say, I do feel safer.  I know that Raven argued that people were still committing crimes, they just went off the grid to do it--and him wanting to keep that gun was just crazy!  But I used the grid, and the fact that there might be cops watching those cameras to protect myself several times.  Of course when I had to break into the museum, having to fool those cameras was a big nuisance.  But I managed.  My dad also taught me to think.

I am impressed with your ability to calmly outwit many of your enemies. How do you stay level-headed in the face of serious danger?

I  wasn't calm!  I was scared to death all of those times.  But in an emergency, you either freeze or the adrenaline puts your brain on fast-forward.  You start looking at everything as a means to help you run, and only if your exit is blocked do you start looking for weapons.  There was a guy once, an actor, who pulled an injured man off the subway tracks just before a train ran him down.  I saw the actor being interviewed later on the news, and the reporter said that after he'd lifted the man to safety the actor told the people around him, "Call 911 and alert the transit authority."    The reporter commented that that was pretty precise vocabulary in an emergency situation.  I mean, who says "alert the transit authority"?  The actor laughed and said he had no idea where those words came from, that he'd never talked like that in his life.  It was adrenaline working on his brain, making his thought processes, and speech, very precise and directed.  So I guess it affects a lot of people like that.

I've been wondering: What was it like to watch Raven transform? Was it gross or cool to watch?

At first it was totally gross!  I was horrified.  After that it was always kind of stomach turning, but eventually I'd seen it happen often enough that it didn't bother me the way it had at first.  But it was always weird.  People are meant to stay the shape they are, and watching that change was always creepy, even when I was more used to it.


*   *  *
Thanks for the interview, Kelsa! And, thanks to Hilari Bell and Teen Book Scene, I have a (used) ARC of this book for one of you. I did spill a tiny bit of coffee on it, so it's not a perfect copy. But, it's still very readable and definitely not ruined.
To enter, just leave a comment stating why you'd like to read this book AND
an email address so that I can contact you if you win.
Open to US residents only. Closes on January 17th at midnight (EST).
Extra Entries:
+1 Follower of this blog
+2 Comment on my review of this book
Posted by Mrs. DeRaps