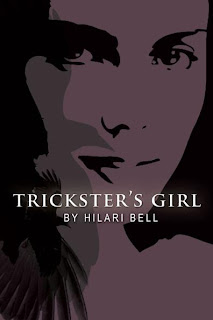 It's almost 100 years from today. Kelsa, the main character, has just lost her father. He was her idol and her best friend. He cared deeply about the environment, and Kelsa mother's doesn't understand just how deeply his death has impacted her daughter. While trying to commune with nature and spread her father's ashes in places he felt most at home, Kelsa meets a cunning, conniving, and shape-shifting trickster. His name is Raven and he needs Kelsa's help to accomplish his mission: Save the planet from certain death.

In this futuristic world, humans and the supernatural have basically destroyed the environment. The ways that humans have impacted the earth are obvious: more of the pollution and global warming that is already happening. But, there are supernatural forces at work in this novel as well. Not all creatures want to save the earth; some work against Raven and Kelsa in their mission.

This book combines a couple of genres. It's like a dystopia in that the government is controlling and the environment has been completely wrecked because of human consumption. And, there is a paranormal element to this book. Native American mythology and underworld characters abound.

As a fan of both genres, I wish that I loved this book more than I did. I have read other book reviews (and listened to a rave review from my local bookseller), so I know that opinions are mixed where this book is concerned. Some people are loving it and others are not so much in favor of this new series. (Because there will be more...)

I was entertained when I was able to get into the story. Every time I had to put it down, though, it was not easy to get back into. I did enjoy Kelsa and thought that she was a strong female lead. I also love the idea of mixing the dystopian and paranormal genres. This attempt lacked a little in its finesse at merging the two, but I look forward to reading other books where authors try this merge.

If this is on your wishlist, stay tuned for an ARC giveaway and an interview with the main character tomorrow. Like I said, reviews have been mixed. You might just love it!
Posted by Mrs. DeRaps