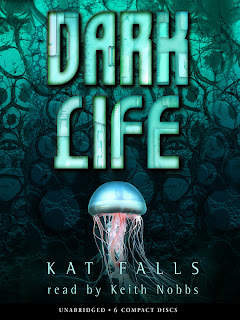 In the futuristic world of Dark Life, the world is divided. There are those who live "Topside" or above water, and those who dwell deep under water. On land, the Commonwealth Government rules what is left of the overpopulated Earth. Due to many environmental and natural disasters, there is too little space for too many people.

Under water, life is more like the Wild West. Those who choose to farm on the ocean floor are called settlers, and they have no shortage of dangers and dangerous personalities to contend with. Ty, a teenager who was the first to be born and raised under water, loves the freedom and adventure that his life brings. His days are filled with chores, roaming the wide ocean plains, and swimming with dolphins.

Some who live Topside say that the children born under water have develop Dark Gifts, but Ty and the other children deny it. One scientist supposedly discovered a boy named Akai, who could communicate with dolphins via sonar, but this boy's existence has never been verified. Nevertheless, there is definitely a divide between those who grow up Topside and those who live under water.

The peace and thrill of Ty's life changes completely the day that he meets Gemma. Ty comes across her just after she's gotten herself into a tough situation. She went under water to find her missing brother, but didn't really have a solid idea of where she was going or the amount of danger that she could encounter under the sea. Ty saves Gemma, but is quickly drawn into her quest to find her brother, which leads them further and further into the "darker" side of Dark Life.

The reader of this audio book, Keith Nobbs, does an excellent job. He reads for all of the characters, but still managed to highlight their personalities in his reading. I think that some high schoolers, particularly those who love a good dystopia, will enjoy this book. On the whole, though, I think that this is more of a middle grade read. I was entertained by it, and liked that the subject matter got a little dark at times. The was that great middle grade balance present, between edge and innocence. There was enough material to make you think about the world developed in the story and the ethics and morals (or lack thereof), but there was no language or sexual stuff going on. Definitely middle grade.