Book Review: Those That Wake by Jesse Karp 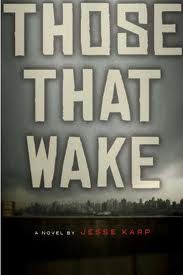 Something has happened to New York City. The normally vibrant city streets are filled with people who act like drones. And, for Mal and Laura, their whole world has changed. For some reason, no one seems to remember who they are. Their parents, their friends, no one. It's like they never existed.

At first, this novel is told in alternating chapters between Mal, a tough city kid who is fights at the local gym and is in foster care now that his father has died and his abusive mother has disowned him. He loves his brother, but they aren't close because of horrible incidents that happened in their childhood. Mal receives a phone call from his estranged brother, Tommy, late one night. When he tries to find Tommy soon after, he's no where to be found. Fearing foul play, Mal starts looking.

Instead of finding Tommy, he meets Laura. She is a seemingly perfect girl. Great grades, all of the right clubs and such for her college application to Yale, only child of doting parents. That is until she tries to call her parents who are vacationing in New York City for the weekend. At first it seems like a joke, because her parents don't recognize her when she calls. They say they have no children. Laura leaves the suburbs and heads into the city to find prove to her parents that she exists.

And that's when she meets Mal. Both are having strange dreams and are finding that no one remembers who they are. They form an instant connection and have a shared purpose--To reclaim their lives and the people who are supposed to know them.

Sounds really good, right? Hm. I just didn't love it. At first, with the back and forth narration, I was pretty into Laura's story, but once the two stories combined and the book got weirder and more crazy, I lost interest. I kept reading just to find out what happened. but didn't have a ton of feelings for the characters or their plight. Which is unlike me. I usually connect with characters fairly quickly and stay with them throughout a novel. Not so much with this one.

I am a little scared. This is the second dystopia that I've read this month and I have not loved it. Have I entered some sort of parallel universe where I still appear to love this genre, but can't find a single book that will satisfy my tastes? Naw. That can't happen! Or can it...

So, I did not love this book. I didn't hate it, but I will not be gushing about it to other lovers of this genre. You're all welcome to go ahead and read it and love it and disagree with me. That's fine. I can take it.