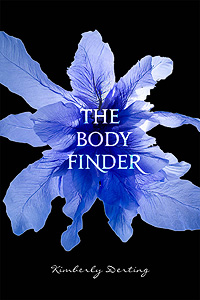 Ever since she was young, Violet Ambrose could smell and feel and sense death. And I don't mean that she could smell dead bodies, it is more like she has the ability to locate the spirit of a dead body, if that makes any sense. When she was just eight, she found her first dead body. A girl. Who had been murdered. Rather than scare her to the point of losing her powers, Violet has learned to listen to her senses and actively looks for the dead who call to her...Not that she can resist the urges when they call to her.

Now that she's a teen, she is living a fairly normal life. Not many people know about her special skills, and she normally senses the dead bodies of animal and birds that have been killed by a predator. Until she finds another body. This time, it's another teen girl and it's not long until another girl disappears. And then another.

It is clear that there's a serial killer on the loose. Violet's uncle, a local police officer, believes in Violet's ability and uses her skills every once in a while to help locate the dead. Now, Violet is in danger. The killer has spotted her talking with the police and is out to get her.

Along with this suspenseful story comes a bit of romance. Violet and her best best friend Jay have a great romantic tension between them. They are obviously compatible; that's what made them such great friends for so long. But, Violet is worried that a mistake or awkward encounter with Jay will interfere with her friendship. Jay doesn't seem to have these fears. He's pretty clear (in my opinion) about his feelings for Violet.

I enjoyed this suspenseful, romantic story. I've read some criticism about the author's choice to have the romance between Violet and Jay and the whole serial killer thing all together in one book. I liked it. I don't know that a book that was entirely about a serial killer and Violet's special abilities would've held my attention so well. I liked a respite every now and again from the serial killing, especially since the segments written from the serial killer's point of view were so utterly disturbing. Well written, yes. But totally gross.

I will definitely continue reading books in this series. I think it's original and interesting and even a bit realistic, as far as paranormal lit goes. Plus, it's entertaining and I like the characters. What more could you ask for?
Posted by Mrs. DeRaps