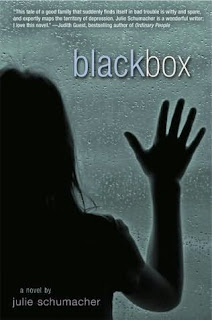 I sometimes keep a book at school on my desk and read it during Silent Sustained Reading during the school day. Sometimes, the book will go home with me and other times it will languish on my desk for a while until I finally finish it. This book is of the latter category; I've had it on my desk for a couple of weeks and have read it every day.

The fact that I have not taken this book home to finish is not a commentary on how well I appreciated or enjoyed this book. It's almost like the structure of the book, which is almost like a series of short vignettes than actual chapters, allowed me to read ten or fifteen pages and then set it down for a later reading. It had a bit of a meditative affect on me--I couldn't stop thinking about the characters in it once I got into the book, but didn't want to rush them through the story. I am a fast reader, but sometimes like to slow down the process for a book that requires a more thoughtful reading. This book, for me, is one such read.

Black Box is the story of a girl named Elena and her experiences over the course of a few short weeks. The book opens with her beloved older sister, Dora, having survived a suicide attempt. Dora is in treatment for her depression, but Elena is feeling lots of guilt and anger about the situation. Her parents are not absent or abusive, but they are a little lost in exactly what they should do to help their daughters. And, both daughters do need help.

Elena turns to a boy she just met, Jimmy, for help. He wears a lot of black and is generally known as a bit of an outcast, but seems to understand what Elena and Dora might be going through. Jimmy tells Elena that his brother tried to commit suicide and has had treatment. Jimmy and Elena forge a tight friendship and a tiny little romance--though this is not at all the focus of the novel.

I decided to finish this book today after having listened to a podcast of This American Life last night while doing dishes. One segment in that podcast dealt with a man who had recorded interviews with a friend who had attempted suicide and who still planned to kill himself even after being rescued by emergency workers. This story troubled me deeply; I have know a few people who have committed suicide and I know the pain and devastation that a suicide (attempted or successful) leaves.

At the end of this story, the author includes a little afterward, where she says that a friend told her not to publish this book because of the subject matter. While I understand that it is hard to imagine any teen wanting to commit suicide, I know that it happens. I think, as the author points out, that depression can leave those experiencing it and those around a depressed person with feelings of loneliness and absolute desolation. Books can help to bridge that void. Characters can speak to the reader when a relative or a counselor or a friend might fail.

This book may not be for every reader, but I am happy to have it on my classroom shelves. I know that it will be of some comfort to a handful of my students who are dealing with their own issues of depression or who are trying to deal with the depression experienced by people they love and care about.
Posted by Mrs. DeRaps