Book Review: I Am Nujood, Age 10 and Divorced by Nujood Ali and Delphine Minoui 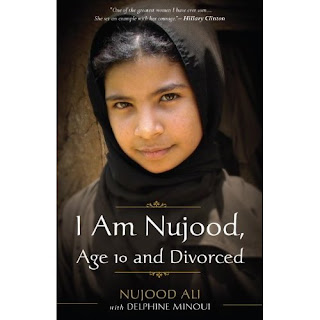 I am trying to get more and more nonfiction onto my free reading shelves for my students. This is not an easy task when it comes to needing accessible, interesting material for teens aged 14-19. Lately, though, there have been more nonfiction options for teens. This is one such book.

First of all, the title is intriguing and basically says a lot with just a few words. I've done two book talks for this memoir already, and each time there have been audible gasps when I just hold the book up and students read the title. It's shocking. And, when I tell them that it's real, students just can't believe it. There is no better hook than a gripping, emotional title.

This story takes place in the small, conservative Muslim country of Yemen. I am trying to learn more about the Middle East (and other areas of the world) in hopes of teaching World Lit in a more current, interesting way. Traditionally, sophomore English at our high school is called World Lit and the materials are all ancient and Euro-centric. It's comprised of Shakespeare, Greek Mythology, Greek literature, and Kafka. Not a modern, non-male, non-white perspective to be had.

This book would be a perfect way to introduce women's rights, children's rights, and Middle Eastern culture/ religion/ philosophy to students. In it, Nujood basically causes a small revolution when she escapes her home and forces a group of judges to listed to her case. Married off at the age of ten, she was brutally raped and abused by her "husband" and his family. Her own family did not support her desire to divorce her husband, so she ran away and advocated for herself. All of this action is in spite of the dangers that could have befallen her if her relatives had decided to shun or harm her for shaming them.

After this case received national and international attention, other girls came forward with their cases and laws about the age of consent have been changed. Of course, there are still lots of instances where young girls have been married off to much older men, but this spark has caused a wave that could help many girls and women in countries like Yemen.

Most importantly, this book offers a window into a foreign world and does so with great respect for the culture and traditions of the Middle East. It is not a smear, but an insight into a way of life and thinking that is very unfamiliar to myself and my students. Plus, it's well-written and engaging.

If you know of any other nonfiction reads that I should order for my classroom, please leave a comment. Thanks for any help you can offer!
Posted by Mrs. DeRaps