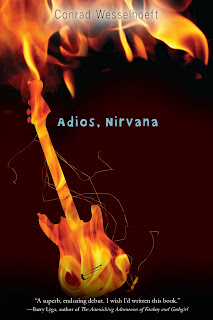 It's almost a year after the fact, and Jonathan is still dealing with the death of his twin brother, Telemachus. Or not dealing. Living but not moving forward.

Jonathan learns that he's going to have to repeat his junior year if he doesn't follow through with the plans set forth by his teachers and principal. This plan is no collection of worksheets, but more like a series of challenges personally designed to wake Jonathan from his mourning, to get him back into his life again.

Part of the plan is that he attends all of his classes and completes all of his homework, which doesn't seem to be much of a stretch for him. He's smart enough and, with the help of Red Bull, he doesn't sleep. The more creative parts of the plan require Jonathan to perform a song at that year's graduation ceremony--Jonathan's an excellent musician, but not used to performing without his twin. Finally, Jonathan must write the life story of a local war vet who's personally requested Jonathan after watching him win a poetry competition.

Thus begins the journey of this novel, where Jonathan will either succeed in regaining his life, or drown in the longing for his brother to return.

Many of you know that I am a teacher, but what I don't usually talk about is the fact that I work (pretty exclusively) with teens who are considered to be "at-risk." In our local jargon, this means that my students will probably not graduate if they have no intervention. I am telling you this because this story, this character, Jonathan, reminded me of so many young men that I've met over the eight years that I've been doing this.

Jonathan typifies the most difficult type of at-risk teen to work with, in my opinion. He is super smart, creative, sensitive, and in serious pain. He is gifted, so school work does not really pose a challenge to him. His mother is a single mother, and is very lax and in a great amount of anguish over her son's death. More than this, Jonathan pretty much sees the world for what it is--a series of hoops to jump through, a means to an end.

I was impressed with the way that the school dealt with Jonathan. Rather than coming up with a generic, impersonal academic plan, they allotted time for Jonathan to find his strengths and his bearings as a teen who has lost his twin brother, his best friend.

This book is raw and beautiful and mentions all sorts of music and writers that I love. Poetry and lyrics and intelligence are a focal point. Jonathan feels like a real person, one that you'll want to encourage, unsure if he'll actually make it.

I loved this book for its writing, its realism, and its honesty. Very good indeed.
Posted by Mrs. DeRaps