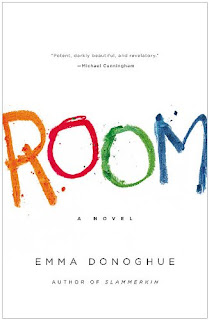 I have to admit that when I first started listening to the audiobook version of Emma Donoghue's Room, I was disturbed by the voice of the main character, Jack. He's a five year-old, so the adult reading for his voice was just not working for me. I soldiered on, though, and have come to love the voice of Jack.

I can't believe I actually listened to this book given the plot description. It's about a woman in her mid-twenties who was kidnapped seven years prior to the start of the story. The man who kidnapped her, dubbed "Old Nick" by Jack, has kept her in a locked outbuilding "room" for the past seven years. In this room, she has birthed two children, who were a result of the repeated rape she experienced most every night. One child was stillborn, but Jack lived. And now he's five.

This story would be so very different if it were told from the perspective of Jack's mother. But it's not. So, the reader (or listener in this case) sees the tiny world of Room through Jack's eyes--innocent and naive as any five year-old's. His language and phrasing and the way that he makes sense of the world are both amusing and frustrating. Like his mother, I sometimes lost patience with Jack and wanted him to understand more than he did. Or could.

I don't want to give away too much of the plot in this review, but I will say that this book is so very disturbing--not in a leering, gross sort of way, but in a way where I'm admiring Emma Donoghue for having the presence of mind and the strength to write it in the first place. In my listening, I definitely wondered about the women (and children) who have been assumed dead and then found years later, hidden in backyards and basements. Some of these women have had children while in captivity. I am sure that at least one or two of these stories inspired or shares similarities with Room.

At times, I felt a bit voyeuristic just listening to this story. I didn't want to intrude on the privacy of a woman who has endured more abuse in her lifetime than a person should ever be expected to endure. I also didn't want to shame Jack for not knowing the ways of the world. Because he's just a child. And then I was able to just relax and listen, delighting Jack's observations of our crazy world that he sees only through a television set. He is at once adorable and annoying and innocent and active. A true five year-old!

I highly recommend this book to anyone who's interested in (and has the stomach for) this type of story. I enjoyed listening to it, but sometimes wished that I could just read it at my own pace. The audiobook version is well-done, with several readers contributing voices. And that Jack. He's with me for good, I'm afraid!
Posted by Mrs. DeRaps