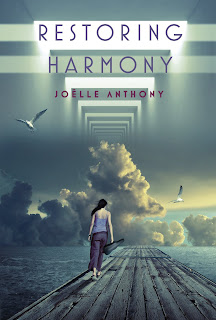 Canada, 2041. North America, Europe, and (possibly) other parts of the world have suffered a Collapse. Meaning that the economic system of stocks and bonds and bank loans and stores has fallen. People are back to a barter and trade economy, which is good for those who know how to live off of the land and who have some sort of valuable skill set. Not so true for others who are used to ordering out for food and relied on credit cards to get by. But, these people are dying off or are adjusting to life after the Collapse.

This story starts in Canada, with a 16 year-old girl named Molly. She is a talented fiddle played and a hard worker. She lives on her family's farm, and is pretty self-sufficient. She'll have to be, because her mother received some information that Molly's grandmother might have passed away. That leaves Molly's estranged grandfather all alone in Oregon. The United States. Far away in normal life, never mind a world where gas and oil are non-existent.

Because Molly's mother is pregnant, she cannot attempt the weeks-long trip to Oregon. And, the family has little in the way of cash to get Molly to the US safely. Molly will have to make-do with what she has and rely on the kindness of strangers and her ingenuity. So starts Molly's journey into the wold world of a post-apocalyptic United States.

Sounds like a fairly good premise for a dystopian book, right? Well, there were several problems with it that kept me from loving it. Which is strange for me, because I normally love this genre above all others and have a high tolerance for unbelievable plots. But, there was something too gentle and kind about this book. When I started reading it, I was thinking that it would be a YA version (or something similar to) Cormac McCarthy's The Road. I didn't need it to be quite so gruesome, but there had to be some suffering, some vioence, some death, some destruction, right? I mean, people are supposedly going hungry. As in dying. But, there was not a single death in this story. And, that was just a little too chipper for this reader.

Even more painful for me were the lack of emotions expressed by the main character in this book. She would have something horrible or potentially defeating happen to her and just kind of move on. Too shallow, to unrealistic for me.

I'm thinking that this book might be more of a middle grade read than a high school one. I cannot picture my high school readers, who have loved The Hunger Games and The Knife of Never Letting Go series, picking up this book and being satisfied. But, there may be a place for it in a middle school classroom. I'll have to donate it to the library there. I just don't think that it's going to interest any of my dystopia-crazed kiddos. Too neat and clean and nice. My kids aren't into that!
Posted by Mrs. DeRaps